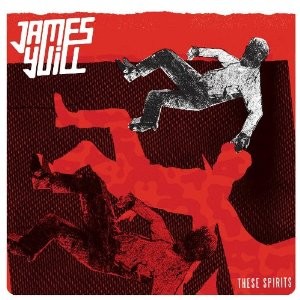 Folk musicians are often pictured with nothing but a guitar slung over one shoulder, a cigarette in their mouth and an enlightened vision of the world around them. But that’s all rather old hat for folk in the 21st century. James Yuill, folktronica specialist, is something of a big fish in a rather secluded pond, masked by a scraggy overgrowth at the back of the garden. ‘Folktronica’ is a purely compositional term and it is largely befitting of Yuill’s diverse range in style, most notably on 2010’s Movement In A Storm. Adding a laptop and a few mixing desks to the humble folkie’s paraphernalia, he has managed to create incredibly varied and original sounds whilst still remaining faithful to elements of what we would perceive as a typical folk singer-songwriter.

These Spirits, like its predecessor, is essentially an electronic pop album with the twist that it’s written and performed by someone with a genuine talent and a background in folk. It’s a record dominated mainly by lush synths, layered vocals and a wide range of percussive sounds. It’s not until the half way stage where we hear the first rumblings of an acoustic guitar on the song Carrie, a spacious track sparsely fluttered with simple snare sounds and an accompanying female vocal that resonates with an underlying sinister tone. Lyrics like “Down comes comfort, in walks evil” give the otherwise pleasant and familiar acoustic track a certain uneasiness. Just A Little Further  follows in a similar vein but is beefed up with synths and more abrasive and abstract percussion, leaving a lovely balance between two styles.

Lost In California and the single Turn You Around are much more indicative of the entire album, with pulsating kick drum beats and electronic bass lines that aren’t a million miles away from Calvin Harris. The bass lines are leisurely however, and don’t instinctively conjure up memories of tourist laden beach parties on a small Greek island, although Let It Go flies very close with its staccato synth stabs. But there are some highbrow concepts at play, notably the reference to Sisyphus (those Greek mythology classes have just paid for themselves) in the video to Turn You Around, a rather bleak account of pursuing a path forged through false pretentions.

By the very nature of how James Yuill operates there is a looped feel to some of the sounds on this record –  which isn’t necessarily a bad thing. The album is at its strongest on tracks like Second Hand Steinway, where the melancholic nature of his vocal is most at home. The more electronic tracks are let down by his rather samey, polished vocal style which never pops out of the mix at any point, and after a while becomes quite monotonous. These tracks also lack the zest of more traditional drum sounds, the like which Tegan and Sara have infused so well on their latest effort Heart Throb.

The album is however one that offers some fantastic blends of pop and folk, and the live performance which James Yuill pulls off his one to be admired. Ultimately, although the softer, folkier moments merit  attention, the album does linger in parts and really could do with a shot in the arm to lift its energy levels.