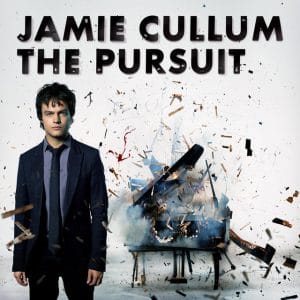 Do not be fooled by The Pursuit’s packshot. Although reminiscent of the same disrespect for the ivories shown by Faith No More in their video for Epic, Jamie Cullum has not gone the way of funk metal.

A hundred surly faces atop the most formal garb, appearing disinterested in a thousand exploding pianos, would not be able to mask the nature of Jamie Cullum’s latest work. Try as he may to dissuade you visually following his hiatus, the boisterous scamp has not, in fact, jettisoned the style nor the habits that have lured the masses to his particular brand of music for something like a decade.

Quite the contrary, actually, for this album once again combines a variety of original and covered material, the latter of which has no collective regard for genre nor era, in Cullum’s playful, jazz/pop blender.

In terms of style, sound, subject matter and, at times, execution, The Pursuit is all over the map. It opens grandly with a loan from the Cole Porter songbook. Just One Of Those Things, a selection from the musicalJubilee, is retooled by Cullum in extravagant fashion – big-band rhythm and brass squeals, a smooth, John Coltrane-esque saxophone solo and Cullum’s impressive improvisation and raspy vocals do well to break the four-year-old ice grandly.

Later, Cullum borrows a cut from Sweeney Todd, his knack for balladeering on display in Stephen Sondheim‘s tender Not While I’m Around. By now it’s obvious that, with topics ranging from one-night stands to genuinely sweet and loving promises, it’s best to not commit to any singular mood while listening to this album.

The Pursuit’s strong closer is a traditionally bass-thumping entry in a dance club DJ’s set list. Cullum had extra beats on hand, wholly extracted from Rihanna‘s Please Don’t Stop The Music to create a fresh, jazzy revamp of the pop hit. The fantastically swingin’ YouAnd Me Are Gone, complete with hand claps and a nifty insertion of”modus operandi” into the lyrics, also represents magpie Cullum’s talents well.

But the variety is not reserved for the dizzying array of styles and themes; quality is mercurial too.Avoidable tracks include the ultra-sappy and sluggish If I Ruled TheWorld and Mixtape, an awkward combination of disco and jazz in which Cullum’s eclectic music tastes are highlighted.

Although he’s spent time away to pursue other musical endeavours, embark on a friendship with gruff acting legend Clint Eastwood and meet supermodel lady friend Sophie Dahl, musically Jamie Cullum returns to his listeners where he left off. His ‘modus operandi’, if you will, remains the same, and his angry, violent posturing is surely tomfoolery.

Although not technically the Twentysomething that caught our attention during the onset of the noughties, with The Pursuit Cullum continues to pursue favour by instilling his blend of poppy jazz in anything that strikes his fancy.