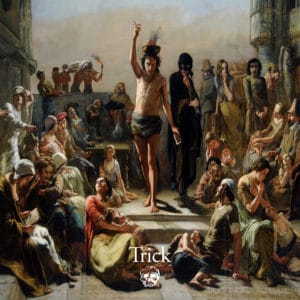 It wasn’t until Jamie T returned in 2014 after a largely self-imposed five-year absence that many realised just how much the Wimbledon troubadour had been missed. There was almost a collective sigh of relief when he finally surfaced again with Carry On The Grudge, which found the then 28-year-old in a completely different place to the brash 20something who first made a name for himself with angsty anthems like Sheila.

Tracks such as Don’t You Find and Love Is Only A Heartbeat Away showed Jamie T at his most vulnerable and candid, while also providing a timely reminder a what a brilliant storyteller he is. The record was subsequently met with virtually universal critical acclaim, with the only concern being whether he would disappear for another half a decade after its release. Thankfully, Treays moved quickly to reassure fans.

“It’d be nice to get something out a bit quicker,” he said, speaking last year after releasing six-track EP Magnolia Melancholia. “Beating five years is all I can ask for.” As good as his word, Jamie T is back with his fourth record, Trick. However, those expecting just a continuation of the more reflective sound that dominated Carry On The Grudge were firmly put in their place by Tinfoil Boy, his rollicking comeback single which also opens the record.

The rest of Trick initially follows in a similar vein, reintroducing some of the quirks that made Panic Prevention and Kings & Queens such essential listening. Take Drone Strike, which comes hot on the tail of Tinfoil Boy. It sees Jamie T rapping with a competence that would give Eminem a run for his money, referencing Ricky Martin’s Livin’ La Vida Loca as he spits lyrics such as: “I’ve been doing this a long time, feel like I’m old time.”

Tescoland is another instant standout, one of many on Trick where Jamie T takes inspiration from Mick Jones of The Clash as he sings about his visit to the United States (“But it’s hard for Americans to really understand/ what it takes for a man livin’ on shattered love/ welcome to Tescoland”). The same is true of the irresistibly infectious Robin Hood, which is sure to be a future indie dancefloor classic alongside If You Got The Money.

Yet Trick is not just a straightforward return to Treays’ musical roots – as demonstrated by the magnificent Power Over Men, a sluggish, raunchy tale that features the sort of laid-back chorus more typical of Carry On The Grudge. Then there’s the atmospheric rap of Crossfire Love and the poignant Sign Of The Times, with the latter an emotive ballad up there with his very best (“Where did all the venues go?/ lost them all to businessmen”).

In fact, just as the album title suggests, Trick is full of surprises and sudden turns throughout. Police Tapes is a fearsome, stabbing brute of a track that makes Tinfoil Boy seem shy and retiring, while the jaunty, psychedelic Dragon Bones is fantastically strange. There is also occasionally a touch of Arctic Monkeys’ AM to the record, most noticeably on Joan Of Arc, which utilises harmonised backing vocals on its anthemic chorus.

This all adds up to what is unquestionably Jamie T’s best album to date – a point hammered home by epic closer Self Esteem. Trick may well be his masterpiece, combining all the elements that have made him such an enduring and much-loved musician over the years to create a genre-bending classic. Ahead of the record’s release, Jamie T said he was in the best place he’s been in six years. The proof is right here.