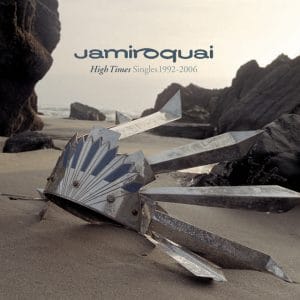 When Jay Kay burst onto the scene in the early ’90s with his squiffy buffalo headgear, Stevie Wonder vocals and the occasional didgeridoo, it looked like a throw-back to the ‘glory days’ of jazz-funk in the mid-’80s when the slap-bass of Level 42 ran amok and white men desperately tried to ‘get down’, while looking like geography teachers having a mid-life crisis, driving white Ford Capris (ask yer dad) with fluffy dice and no sense of irony.

Thankfully Jay Kay had the moves, the youth, the grooves and his tongue in his cheek (and countless womens’), although not the god-like vision his sleevenotes would credit him with, to bring this much-maligned genre into contemporary focus.

Jamiroquai is always spoken of as a group but is in reality centred around frontman Jay Kay and his revolving bandmates. As this playboy such was his fondness for dolly birds, dust-ups and ‘dusting his nose’ that he looked like becoming a caricature better known for his fists than his hits. Luckily last year’s Dynamite album saw Jay take stock of his songwriting, knock his powder habit into touch and return with some rubbery new rhythms that reeked of a clear head getting back to business.

As con ‘best of’s’ go it’s not a bad job, wisely opting for the chronological approach to track listings, there is a marked progression from the jazz-funk origins through to the sleek discoid core and the current funk-fuelled tuneage that we are familiar with, and perhaps too familiar with.

Admittedly there isn’t a huge variety in his styles or lyrical concerns on display here. There seems to be three speeds to Jamiroquai: the fast, ‘dirty’ funk (Deeper Underground), the acoustic, mellow funk (Seven Days In Sunny June) or the soulless polished discoball… err… funk (Virtual Insanity). The real stinkers here are the aimless, the tuneless or the clueless; step forward Space Cowboy, High Times and newie Radio.

In true best of tradition there are two ubiquitous ‘brand new tracks’ of varying necessity. Single Runaway treads a familiar tired (sic) and tested disco-lite path, while Radio tries to dirty things up: “Let’s do some crazy shit tonight.” How you wish he would.

The lyrics of Jay Kay are never going to give scholars sleepless nights. Three out of the first four tracks here are virtually lyrically interchangeable in their eco-concerns, which at the time was alien, edgy and dangerous but today sounds like Coldplay… with didgeridoos. That said these early tracks were tasty, with personal concerns and highly accomplished acid jazz.

So what’s the appeal to millions of global record-buying public? Basically good time music. A bit of disco, soul, funk and the allure of Saturday night mirrorballs spinning a bit of starlight into your stereo as an escape from the grime of the world. Heartbreak is glimpsed through a chink in the mirrorball armour on the trio of comedown classics Little L, Corner Of The Earth and the sublime Seven Days In Sunny June.

As a poster-boy for hedonism they could have done worse. With fancy footwork, tight basslines and swooping strings Jay took the disco beast and his host of rare groove influences and wove it into his own trademark sound. From one who has a passion for cars you can imagine that these sound fantastic burning rubber down the highways in your Lamborghini…or more realistically your pimped-Vauxhall Corsa.

The best that can be hoped for from this collection and Jamiroquai’s subsequent freedom from his contract, is that it could allow him/them to take a few more risks and make his/their songs sound a bit more human instead of as finely-tuned and soulless as one of his beloved gas-guzzling motors. De-pimp his ride.