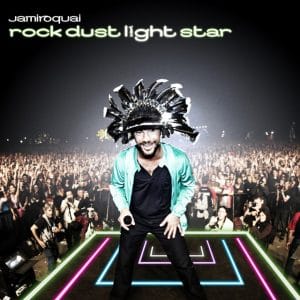 From a British commercial radio perspective, Jamiroquai are a chart-topping pop-funk group with a knack for keeping things interesting while still staying hugely successful. From an American perspective, they’re just the band who did that Virtual Insanity song. No group better represents the curious schism of pop taste better than the Atlantic barrier between Jamiroquai and international stadium tours. They seem to do everything right (the hooks, the looks), but Europe has been their hearth throughout their careers – odd for a band who welcome plenty of American musical traditions in their music.

Rock Dust Light Star is the group’s first album in seven years, and follows a historic run of seven Top 5 albums in a surprisingly venerable 17 years. In what could be considered a sort of retrospection after a five year hiatus, it embraces the funk and soul vibes of early Jamiroquai work rather than the electro textures that followed the band into the new millennium. And as you’d probably expect, they’ve lost any of their innate pop-making abilities – smoothed-out adult contemporary ballads that you can enjoy as much as you’re willing to disarm yourself to their relative unhipness.

Despite the hate Jamiroquai will continually get, at this point in their career it’s quite hard to pretend they aren’t good at what they do; that silky, jazz-funk thing is back again on Rock Dust Light Star, which is not a radical departure from what went before, but they’re so good at it you can’t help but give them some respect. You’re not going to hear a song more universally danceable – at a wedding reception – than Lifeline or White Knuckle Ride all year.

It’s almost rather insidious how perennial hat-wearer Jay Kay can turn something as notoriously disdained as ‘white guy soul’ into something so charismatically lovable. Jamiroquai have walked that line perfectly, and the songs on Rock Dust Light Star require a sustained effort to dislike. It’s designed from the ground up to worm inside your brain and beat your pleasure centres silly.

It’s not album of the year by any means, but it might have been just long enough between Jamiroquai releases that Rock Dust Light Star sounds refreshing, euphoric, and simply exciting all over again. The songs are all ridiculously polished, and as well-written as any of the best tracks as anything in the band’s catalogue. The only thing holding the record back from being truly great is if you have a preternatural urge to punch Jay Kay (we hear some people suffer so) or a misguided aversion to well-crafted pop. If it’s the latter, you’re not listening to music the right way.