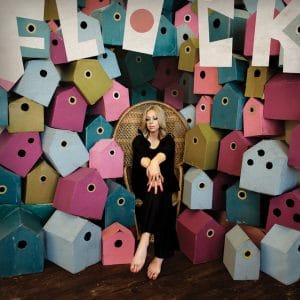 After some gentle flute exhalations, a two-note chime similar to the one that propels Deerhunter’s distended epic Desire Lines loops to form the basis for Heartlow, the song that begins Jane Weaver’s latest album. The song’s narrator, applying the papery brittle delivery favoured by Broadcast’s Trish Keenan, finds herself dejected, expecting a slightly louder response to her previous actions, stating, “I thought the bells would be ringing when I walked home”. The video for the track was directed by Douglas Hart, the former bassist from The Jesus & Mary Chain, and shares that groups love of teenage melodrama & grinding wall of sound guitars and the narrator is one hundred percent right, she does deserve way more praise than she’s gotten so far.

Four years on from previous long player Modern Kosmology, the Liverpudlian songstress is here to ruffle a couple of feathers. Catchy recent single The Revolution Of Super Visions slaps. Literally slaps. An athletic p-funk and interdimensional disco bubblegum chant, it finds Weaver taking to the streets questioning how long the patriarchy can sustain itself and challenging the universe to find better ways to operate. Then a choir of peeling church organs a la Tangerine Dream may mark the arrival of the lushly fluid Stages Of Phases but it rapidly sheds its quasi religious garb for a pair of mirrored platform boots, a smoke machine and laser beams and some Goldfrapp styled multi tracked come ons.

Clocking in at just under a minute and a half, the ambient Mellotron choir and aloof flute that engulf Lux that follows, radiate ever increasing waves of balmy heat. The instrumental interlude marks the end of the record’s proto-glam period and the start of the krautrock centre. Her husky exultations benignly floating over a chugging motorik groove and banks of amorphous sputtering synths, the soul baring Modern Reputation catches Weaver emotionally smearing her tattered copy of Emperor Tomato Ketchup with a good old dollop of brown sauce before the ethereal cyclic samba of title track Flock beckons. Its steamy alien vocals and detached spatial melody would have sat well on the Fenella soundtrack that Weaver released in 2019.

On the sublimely uncertain Sunset Dreams, which perhaps in a nod to Kate Bush, references the Hammer Horror TV series of the ’70s as Weaver reasserts those hauntological credentials as she sings of effigies, past lives and flashbacks. The auditory embellishments of All The Things You Do find Weaver sleepwalking but her eyes open once more on Pyramid Schemes, its internal tensions manifested through it’s unconventional interpretation of library music and Nigerian highlife polyrhythms, resulting in one the album’s strongest moments.

They’ll probably say something like “oh, she went pop for this record” when discussing Flock, a slightly dismissive response, as if Weaver’s previous albums hadn’t, amidst the bouncy glitches and folky plucking, been packed to the rafters with breathy earworms and whimsical melody. Avid listeners have known all long just how funky, playful and revolutionary she’s been, a genuine musical magpie, but sat barefoot on the cover in the centre of a tenement of abstract coloured birdhouses, her eyes closed, on this record this Liver bird’s calling any stragglers back to the roost.