by Andrew Hall
published: 23 May 2017 in Album Reviews
Tweet 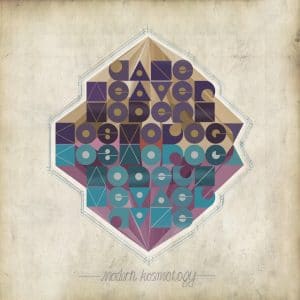 “I’ve been trying to find another map,” Jane Weaver sings on the second track of her seventh LP, Modern Kosmology. “And now I’m changing my world,” she declares on the following title track, triggering a change and opening out in her environment – guitars crunching, machinery whirring into action.

Infectiously enthusiastic and fiercely independent-spirited, Weaver has been in a constant state of searching, transforming, becoming since playing in Kill Laura under the management of Factory Records’ Rob Gretton in the mid-’90s. Misty Dixon was another relatively short-lived act; early single Love Is Like a Butterfly – a charming indie chugger with slatherings of Suicide scuzz – was followed by Iced To Mode, an under-heard album clearly in thrall to Broadcast‘s ’60s-enthralled synth-pop, featuring twee, xylophone-led ditties and an adorable cover of Prince‘s The Beautiful Ones.

Weaver embarked on a series of varied, increasingly esoteric solo projects – traditional singer-songwriter folk fare, experimental soundtracks to Swedish short films, songcycles addressing sisterhood – and didn’t return to spacey, buzzing synths and ’80s pop songcraft until 2014: the Germanic kunstmarchen of 2010’s Fallen By Watchbird giving to The Silver Globe’s kosmische musik (Mercifully, the xylophone was left in the past, swapped for cooing Donna Summery vocals (Mission Desire) and Hawkwind samples (Electric Mountain)). To spin The Silver Globe was to bathe in glistening space-rock/disco-prog/dream-pop rays. Numerous record store workers, 6Music DJs and listeners of just plain good taste and decency span this wonderful LP consistently throughout 2014 (indeed, ever since), and they told their friends; when the time came to begin work on its follow-up, Weaver admitted she felt – possibly for the first time – a weight of expectation.

Modern Kosmology is a continuation of The Silver Globe, exactly the record you’d expect – and hope for – from an artist who was captivated by Kate Bush as teenager, went to see Hawkwind and Gong at free festivals, and is now married to a DJ, artist and fellow musical explorer (Andy Votel) who was mates with Broadcast’s Trish Keenan and reissues LPs like Jean-Claude Vannier’s L’Enfant Assassin des Mouches. Weaver doesn’t try to hide her influences – all the music, film, art, literature and architecture that she loves feed into her work and act as the foundations for her rich, ever-changing interior soundworlds.

The biggest change this time around is the production: cleaner, crisper, clearer. Her voice is higher in the mix, less breathy and drenched in echo; beams of sound bounce off it rather than pass through it. There’s nothing twee about H>A>K, the opener dedicated to abstract artist Hilma af Klint; “I am not your possession,” sings Weaver, the track sucking the listener into its thrilling Minimoog vortex. All-analogue vintage equipment remains her chosen way to evoke the future. The Architect throbs and spins, powered by incredible, impulsive jazz drums, while Loops in the Secret Society features the kind of spindly Velvet Underground guitar that’s been bent into exciting new shapes by Cate Le Bon over the last few years.

Previously, the preeminent Krautrock touchstones were Can (original singer Malcolm Mooney lends some spoken word to Ravenspoint here) and Neu!, but Slow Motion is in possession of a stately radioactive glow that’s unmistakably, classically Kraftwerk. It’s a fantastic pop song, its tune washing over you as Weaver’s vocal lines (“let’s go outside when it doesn’t feel right…we can disappear…I disappear”) bury their way into your brain. The Lightning Back and I Wish pull off a similar trick. Fifteen years on from Love Is a Butterfly, she returns to her four-winged friend on Did You See Butterflies?, and, boy, does it fly!

Listeners with a weak stomach for “hippy-dippy” cosmic concepts may struggle with many of the lyrics on Modern Kosmology – The Lightning Back’s talk of crossing dimensions or lines such as the title track’s “let my love resonate with the strength of the universe.” They’d have to be heartless not to fall for Valley, however – a stunning slice of summer solstice pysch-folk. Made up of birdsong, strings and an electric guitar that ascends like the morning sun, it wouldn’t have sounded out of place next to the other Bearded Ladies on Weaver’s 2007 compilation. Much of the album was conceived by Weaver in isolation on the Isle of Eigg and Anglesey, and Ravenspoint – named after a spot on the Isle of Lewis – has the captivating, creepy feel of a cult commune. She sounds spooked as Can-like percussion pitter-patters and Eastern-style strings drone. “We’re on our way to dust,” Mooney enunciates meaningfully, “Open your eyes!” Transforming states and changing perspectives are once again the order of the day. Modern Kosmology marks another triumphant evolution.