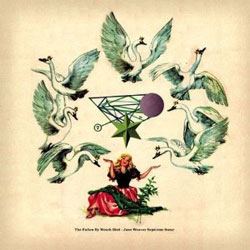 If this sounds worryingly pretentious, opening tracks Europium Alluminate and A Circle, A Star merely confirm such suspicions. Over a backdrop of a droning harmonium and delicately plucked nylon strings (the effect is a self-conscious dream piece), former American teenage pop star Susan Christie recites a spoken word piece. As the words become increasingly submerged, it’s difficult to get a sense of exactly what this is all about. The album’s story involves witchcraft, telekinesis and re-birth. This is very much a fairytale world.

Weaver is surprisingly little known given her long musical history and connections with major Manchester artists. She played more than a bit part in the story of Twisted Nerve Records, having worked with Andy Votel, Badly Drawn Boy, the much missed Dave Tyack, Doves and Elbow. She remains best appreciated for her work with the band Misty Dixon, characterised by layered harmonies and their lovely, drifting, gentle moods.

Some of this sound is continued on The Fallen By Watch Bird (the pleasant, whimsical Turning In Circles), which seems to be at its best when its conceptual preoccupations are kept at arm’s length. However, the album is sometimes undermined by its roll call of collaborators (including Lisa Jen and Wendy & Bonnie) and by Weaver’s occasional tendency to over-reach herself. The album is actually credited to Jane Weaver Septieme Soeur (Seven Sisters, in recognition of the album’s cast list), and the sheer number of voices involved sometimes threatens to make Weaver herself anonymous. Tracks like Whispers Of Winter strain for a ghostly profundity but fail to achieve it.

When its plethora of ingredients blend together well, The Fallen By Watch Bird is modestly charming. There’s a lingering sensation that it might have worked better on a smaller scale. My Soul Is Lost is a circular, lightly textured folk ballad with hypnotic qualities. Best of all is the title track, an eerie, haunting piece that best captures the album’s magic realist ambitions whilst sounding like it belongs on another entirely. It is closer in spirit to the Cocteau Twins than to any acoustic singer-songwriters. This is the only moment when those ‘murmurs of ’80s synth pop’ can really be detected, and it actually seems a shame that Weaver didn’t pursue this line further.

Fortunately, The Fallen By Watch Bird is never quite as uncomfortable a listen as its laboured introduction suggests it might become. The problem for Weaver, particularly in 2010, is that the area of visionary, imaginative folk music has already been explored so thoroughly by other artists. There have been two quite singularly impressive, bold, characterful works from Joanna Newsom and Anaïs Mitchell. Weaver clearly has a talent for vocal arrangement but her disparate inspirations and ideas do not quite coalesce into the powerful, conceptual whole towards which she so obviously strives.