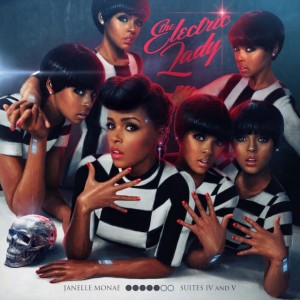 Thomas Edison once noted that “genius is one percent inspiration, 99 percent perspiration”. It’s a maxim which frequently crops up with regards to pop music, where so many artists try so hard to achieve something approaching greatness. When it works, of course, something magical happens and the effort is elided (sometimes so much so that we take it for granted – it took Michael Jackson’s death for us to realise what we’d had amongst us); when it doesn’t, it comes off as desperate and grubby (see post-2010 Lady Gaga).

We found both very much in evidence on Janelle Monáe’s debut The ArchAndroid, a sprawling, arch and self-consciously epic album which clearly aimed to set up Monáe as a renaissance artist to rival Prince or Stevie Wonder at their most imperial. Sporadically brilliant, its eclecticism tickled the tummies of critics who lavished hyperboles upon it; yet its calculation rendered it cold and it failed to connect with the record-buying public in the way which had clearly been hoped.

This failure to launch is all over Monáe’s follow-up, The Electric Lady. Ostensibly continuing The ArchAndroid’s afrofuturistic tale of Cindi Mayweather, a freedom-fighting android, it’s nonetheless a far more straightforward record than its predecessor. This was evident in lead single Q.U.E.E.N. which, with its references to ‘throwing shade’, ‘serving face’ and twerking, seemed determined to ride on the pop culture zeitgeist (if only it had been released pre-Mileygate!). Its commercialism is typical of The Electric Lady’s first half, not least due to its Erykah Badu feature being one of four guest appearances on the first six tracks. It’s safe to say that these collaborations aren’t as remotely mind-bending as The ArchAndroid’s Of Montreal feature – indeed, if Q.U.E.E.N. almost seemed like a deliberate nod to Monáe’s endless comparisons to Prince, having the man himself pop up on The Electric Lady’s first proper song is a neat way to defuse the issue and acknowledge the debt. So, after an introductory suite which places James Bond in a spaghetti western, we launch into the Princely funk-rock of Givin Em What They Love. A stately and sexy number build around Prince’s trademark guitar riffs, its lyrics serve as a manifesto for what is to come: “It’s time to give you what you love!”

The next few songs leave nothing to chance in delivering on this promise, with Q.U.E.E.N. being followed by appearances from artists du jour Solange Knowles and Miguel. The former pops up on Electric Lady, a languid but electrifying Earth, Wind And Fire groove infused with the third-wave feminism which informs much of Monáe’s work. Primetime featuring Miguel, meanwhile, is probably the most conventional song that Monáe has yet produced, its soul balladry recalling Prince classics like Do Me, Baby and Adore.

Hearing Miguel and Monáe cooing to each other is particularly of note as strong allusions to sapphism  otherwise permeate the album. Having notably refused to discuss her sexuality and already being something of a gay icon, aforementioned Q.U.E.E.N. takes on whole new levels of meaning when you pay attention to its lyrics: “Hey brother can you save my soul from the devil? Say is it weird to like the way she wear her tights?… Am I a freak because I love watching Mary? Hey sister am I good enough for your heaven?” Is it reaching to observe that Monáe has previously stated that she has a ‘love for androids’ and one of the (otherwise irritating) interludes (themed on radio call-in shows) finds a caller stating that ‘robot love is queer’? Perhaps, yet it’s undeniable that several of the album’s love songs are directed towards women while a duo of songs in the album’s more interesting second half intriguingly allegorise pioneering women in American history.

The character of Mary pops up again in Sally Ride, a song named after the first American woman to go into space which draws parallels between her pioneering trip into space and the struggle for women’s rights (and possibly gay marriage) in America. Monáe implores Mary to “wake up”, telling her that she has the “right to choose” and dreaming of a journey to the moon “where there are no rules”. Dorothy Dandridge Eyes, referencing the first African-American to be nominated for an Academy Award for Best Actress, is a sweet and breezy jazz-tinged number (with another feature, this time the jazz musician Esperanza Spalding) which finds Monáe rhapsodising about a girl who has “got Dorothy Dandridge eyes and you love her, you love that girl” (harking back to Electric Lady which observes that “once you see her face, her eyes you’ll remember and she’ll have you fallin’ harder than a Sunday in September”). The heavy hints of gay themes certainly lend weight to the otherwise confused and confusing sci-fi story and some of the songs here acquire real power when viewed through this prism. The gentle shuffling positivity of Victory, for example, takes on anthemic qualities with the promise that Monáe will “count your every kiss as a victory”.

If such readings take the album to intriguing places, the core of the matter is that it’s undoubtedly a testament to the music that it can support such readings while rarely being less than dazzlingly entertaining.  Second single Dance Apocalyptic is a Technicolor delight, blending Cab Calloway, Motown, Judy Garland and yes, Prince, into an irresistible cocktail of fun while Ghetto Woman is an appealingly strident tribute to Monáe’s working-class mother. Album closer What An Experience manages the improbable trick of combining ’80s power balladry with sugary reggae while Look Into My Eyes is sublime lounge-pop. As noted, the album expands into its second half, echoing the format of The ArchAndroid if not matching that record’s breadth.

Nonetheless, the album is admirably steeped in pop music history without seeming derivative and where The Electric Lady triumphs is in its ability to connect with the listener. There is certainly calculation here but it’s permeated by deeply personal themes which enable these songs to hit home where previously Monáe has floundered. There’s plenty of time for genius to come but if Monáe can’t quite hide the perspiration that has gone into this fascinating and fun album, she manages the not-easy task of making that seem like no bad thing.