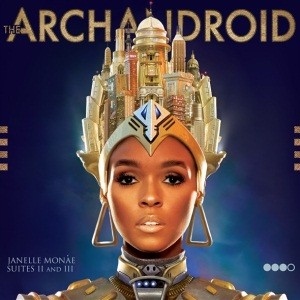 That Janelle Monáe is from a drama background comes as no surprise after even the most cursory listen to her music. The young singer and dancer originally moved to New York from her Kansas hometown to study Theatre, before making the switch to music that seems inevitable given her evident talents. The love of the dramatic, though, and sense of storytelling in her work, remain as markers of her previous direction.

Her quite superlative album The Archandroid comes complete with high concept theme. In brief, Monáe’s alter ego Cindi Mayweather, who also featured in her first album Metropolis, here is seen becoming the god-figure to the android community in the fictitious Metropolis in which these tales are based.

The more that you listen to the album however, the less, in a sense, this narrative concerns you. So overwhelming is the diversity and musical span to be found, and so varied yet consistently on-the-money is Monáe’s delivery that matters of theme and meaning become secondary to the revelatory music.

Immediately signalling that this is to be no run-of-the-mill R&B affair, the album opens – to polite applause – with the beautiful, neo-classical Suite II Overture: light, yet dramatic like the start of a ballet. Quickly afterwards the listener is propelled onwards for the first of several notable collaborations, this one with Saul Williams for the funky, slick and sexy Dance Or Die. The next dramatic change of pace, and a real marker of the ambition of this collection, is found five tracks in with Sir Greendown. With its swoonsome, drowsily sensual vocal this is a ballad that wouldn’t sound out of place in the central romantic moment of a 1950s Doris Day film. Astonishing enough in itself, but all the more so when located between Locked Inside’s feisty swing-funk and the dystopian yet danceable Cold War.

The showstopping single Tightrope, featuring Outkast‘s Bad Boi, a friend from her time spent in Atlanta, recalls 1960s and 1970s divas of the Tina Turner school in its raw energy and sheer exuberance. Come Alive (War Of The Roses) is similarly strident, all catching breath, deep basslines and alternately under- and over-played emoting. Only less successful in as much as it sounds more like one of their own songs rather than a combined work is the nonetheless enjoyably eccentric collaboration with the flamboyantly experimental Of Montreal on Make The Bus.

The eclecticism goes on, never simply for its own sake, ramping up the fascination as it continues. Though under two minutes long, Neon Gumbo features backwards recordings and ominous thunder, as it leads into another siren swoon song – featuring more gorgeous demure-yet-sexual vocals – on Oh, Maker. Mushrooms And Roses ends the first half of the album in a tripped-out psychedelic haze.

The shorter second part – ushered in once again by an Overture (Suite III this time) – similarly refuses to sit neatly within any musical pigeonhole. The Overture recalls a song or some incidental music from a classic Disney cartoon, with its lush strings and wonder-struck chorus of voices, and is another of the album’s old fashioned or timeless moments. Wondaland is a funky triumph, with its pertly robotic synthesised lead vocal, at once disembodied and cute. Managing to surprise and subvert expectations right to the end, 57821 (featuring Deep Cotton) turns out to be a Scarborough Fair-style underplayed folk ballad.

As this wildly talented, unpredictable and near flawless young singer and musician bids her farewell with the album’s longest track, BaBopBye Ya, this time in cocktail club torch singer style, one can but marvel at the impressive range, ambition (realised) and detail of this deeply polished, professional yet utterly, brilliantly bonkers album. An album destined, surely, to take its place among the classics of its age.