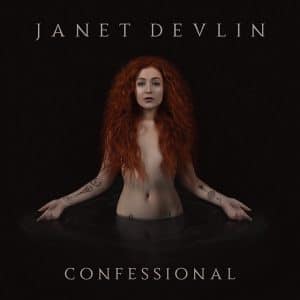 inence as a contestant on 2011’s The X Factor, where her shy youth, Irish charm and unique vocal style captured the hearts of many. Eliminated in the quarter finals, Devlin then performed gigs around the UK and was part of The X Factor 2012 tour. Through PledgeMusic she released her debut album Hide & Seek in 2013, on which she worked with Newton Faulkner and Jack Savoretti. The album received a general release the following year under the title Running With Scissors, with some added material. EPs and singles have followed, parallel to some personal struggles that have predicated her autobiography My Confessional and her second album Confessional.

The album kicks off with the title track, a traditional Irish folk and pop crossover, and we find Devlin’s voice on beautiful and assertive form, laying the foundations for what is to come. So Cold is a tender mid-tempo ballad decrying how mental illness in younger people is often dismissed with a dramatic rock-out denouement. Saint Of The Sinners has the protagonist being the best at being bad. This stunning track is a mournful echo of Beyoncé‘s Halo with a strident harp-laden middle eight precursing an optimistic chorus, perhaps revealing the times Devlin saw light at the end of the tunnel. Honest Men treads a similar narrative, albeit more paranoiac, with some spy guitars casting shades of Lana Del Rey and celestial gospel leading the song home.

There is a sterling mix of folk, pop and traditional Irish shaping the album’s sonic blueprint with Irish scene legends such as Davy Spillane, Eoin Dillan, Brian Fleming and Peter Browne featuring alongside production from Jonathan Quarmby (Lewis Capaldi, Tom Walker). Devlin’s distinctive voice channels Donna Lewis, Jewel and Shakira, and has a beguiling charm and honesty that is truly enchanting and lends to the deeply personal vignettes on the album. Away With The Fairies is a curious and fascinating tale of getting wasted that strangely evokes Tori Amos‘s Crucify. Better Now is a touching ballad forming a more introspective Christina Aguilera‘s Beautiful. Cinema Screen is more than reminiscent of Florence Welch at her most wistful, and the subject matter of an eating disorder posing as a dangerous lover is not only brilliant but also intriguing. Things turn darker on Speak, a heartbreaking folk ballad recounting a harrowing personal experience.

There are more sanguine moments on the record. Love Song is bittersweet sweeping pop with a glorious chorus. Holy Water is Bewitched meets Jewel capped with a jaunty and rousing chorus. Big Wide World has a touch of HAIM optimism and Sweet Sacred Friend is a folky R&B pop fusion that has Devlin bidding adieu to her struggles with addiction with a stunning traditional chorus.

The album closes with the mystical Hand Me Downs and encapsulates Devlin’s journey from child to woman, deconstructing learned responses and personal experiences with some precious lyrics. Never overblown, Confessional is an honest, brave and knowing cathartic journey, dealing with addiction, self-harm, religion and sexuality. This is a captivating and triumphant work of art from the depth of Devlin’s heart and soul.