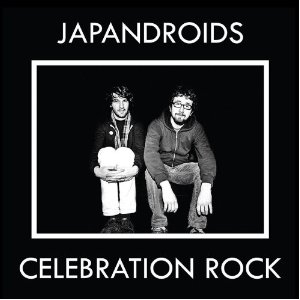 So runs the catechism of garage rock, all present and correct on thefull-throated Celebration Rock. A duo, Japandroids are even morestripped back than your average band – never mind a garage, they’deasily set up in a bus shelter. They tick the genre’s boxes inwielding an uncompromisingly huge, swarming collision of feedbackdrenched guitar and muscular, primal drums. Singer/guitarist BrianKing is also prone to statements like: “We started a band not to befamous or make money, but to go on tour. So for us making records ismore of an excuse for us to… play the songs for people.” Such songsare, superficially, about drinking, smoking, getting girls, notgetting girls and hollering to the heavens about it all.

So far, so ear-bleedingly obvious. Yet Japandroids deserve to be fetedbecause they manage to be different in the midst of staying the same,making the simplest of templates their own in unassuming style. Thisis far harder than it sounds. Where others have taken the blue collarrock form elsewhere – Titus Andronicus melding it with morehighfalutin concerns, Sleigh Bells sexing it up with coquettishmetal, The Hold Steady weaving compelling narratives -Japandroids are resolutely, starkly uncomplicated. Garage or no,they’ve distilled rock to its essence. The cover says it all – a blackand white photo of the band just having a sit down, it’s as disarmingas their music which neither overreaches nor becomes a bone headedparody of itself. It’s still fun, but more than that, it’s capable offeeling important. It frequently actually is.

This is born of redemption. The duo thought themselves dead in thewater in 2008, sick of self-recording and releasing to no recognition.They had already agreed to call it quits well before label interestsurfaced, with the first LP Post-Nothing issued in early 2009. The bandreluctantly agreed to promotion, charging into every gig with thealarming, reckless abandon of those consigned to fate. Heads turned.Buttressed by a critical clamour and blogosphere buzz, touring waslike a constant victory lap, each sweat pit of a show a vindicationand valediction. Still resigned to disappear, the duo issued a clutchof singles to get rid of remaining material. But then what? Tour over,with nothing left to lose and a fractious relationship smoothed over,2011 was earmarked as a year to start from scratch and record analbum. They thought they may as well try, even if they crashed andburned.

Celebration Rock is instead a triumph, showing that those with leastto lose often have most to gain. It starts and ends with a fieldrecording of fireworks, and there are plenty of metaphorical onesin-between as one punishing, joyous song runs into another. The recordhas a tighter feel than its predecessor, but its (virtually) as-liverecording style is retained and arms it with a merciless sense ofpurpose. Quiet bits? What’s the point. The album’s eight songs fairlyrattle along in a rising, sawing blitzkrieg. Lead single The HouseThat Heaven Built especially is an absolute screamer, based around awordless refrain and key lyric of “Anything tries to slow you down,tell them all to go to hell.” Then there’s the desperate, roilingnostalgia of Younger Us, the breathless Evil’s Sway, the urgentAdrenaline Nightshift.