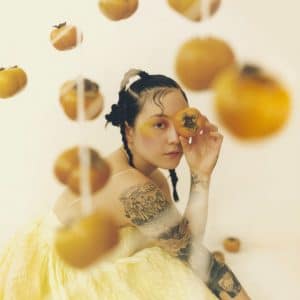 It’s quite a jolt listening to Jubilee, Japanese Breakfast’s third album, for the first time. By now, Michelle Zauner, who pretty much is Japanese Breakfast together with her husband Peter Bradley, has (probably unfairly) been firmly pigeonholed as part of the ‘sadcore’ movement. With both of her albums, and a memoir, exploring her mother’s death from cancer, there’s a sense on this record of packing the past away and learning to start again.

So as soon as the marching drum beat of Paprika kicks in, it’s clear that Jubilee is a whole new beast. Although there’s still a sense of wistful melancholia draped over the album as a whole, it’s mostly the sound of an artist moving forwards. And on tracks like the irresistible bop of Be Sweet, providing some of the most addictive pop music you’re likely to hear all year.

Jubilee sounds like a record with added confidence to it, whether that be the parping horns announcing their arrival in Paprika, or the long drawn-out guitar solo that closes the final track Posing For Cars. Inbetween, Zauner’s also not afraid to explore the unexpected – such as the saxophone that suddenly appears over Slide Tackle, or the eerie backing vocals that are scattered throughout the Alex G produced Savage Good Boy.

Ultimately though, Jubilee is an album to luxuriate in. The gorgeous Kokomo IN is coated in slide guitar and strings and Tactics has an orchestral flourish to it that sounds just lovely. The presence of Jack Tatum from Wild Nothing on a couple of tracks is no surprise – there’s a similar, blissed-out atmosphere on Jubilee that is there on the best of Wild Nothing’s material.

Lyrically, the search for joy and happiness is a repeated motif. There’s a yearning and longing to Kokomo IN as Zauner harks back to first love and teenage lust, with her protagonist pining over their faraway love – “Though it may not last, just know that I’ll be here longing”. It’s a song that captures that intensity of that stage of life quite beautifully.

The blissful sadness of In Hell also makes quite a mark, with Zauner’s repeated chorus of “Hell is finding someone to love and I can’t have you” guaranteed to have all unrequited lovers tearing up. Tactics, which follows it, makes for quite the emotional one-two, with lines like “Aching for others, with love that stops short” as those gorgeous strings swirl around.

Despite that air of poignancy which Zauner is so good at, the overall feel of Jubilee is an uplifting one, as she packs old emotions away and begins to explore new avenues. As she sings in Paprika, amongst all the intricately arranged horns, “oh-oh, it’s a rush”. This album certainly is a rush, and it’s also the best Japanese Breakfast album to date.