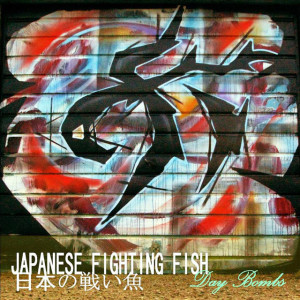 When two Japanese Fighting Fish leapt out of the tank to join a Brazilian samba band, the immediate future of the Leeds outfit became unclear, the band’s experimentation with South American rhythms seemingly having had unfortunate repercussions. Following the recruitment of a new rhythm section, lead singer Karlost – he signs off as Karlost Fish – and equally bizarrely named Gareth Mochizuki Ellmer were able to continue along their particular path.

With earlier material varying a little in style as the band moulded their own sound, Day Bombs represents a settling down of sorts, with the focus firmly placed on heavy guitar riffs, thundering drums, thumping basslines and Karlost’s ramblings. The parts add up to a sizeable fish that swims somewhere near System Of A Down waters.

Apparently inspired by Foo Fighters recording material in a garage, the tracks here were laid down in various garages from Leeds to London, the last effort being recorded next to an old meatpackers in Tottenham Hale. Graffiti artist Cage One happened across them one evening, subsequently spraying his art all over the garage doors and providing the band with their album cover in the process. The band then departed these shores to mix the album in New York.

Pummelling drums and incessant bass announce the album’s arrival and then the eccentric vocals of Karlost burst forth, scaring the hell out of any ill prepared listeners with their devilish presence and almost comical r-r-rolling Rs. It’s a cardiac arrest of a beginning and the repeated chorus of “I don’t wanna be here, I don’t even wanna be here” is exactly what you’re thinking in the midst of an abomination of noise.

“He doesn’t know what he wants,” sings Karlost on the track of the same name before it begins to tick along with a much toned down beat, and the guitar riff backed chorus marks an excellent highlight that should probably have been the lead single. Third up is Greatest Excuse, which was a single, and it’s enjoyed some recognition and national airplay; it’s a fair effort, even if it sounds like a band taking their madness and toning it down for the specific purpose of garnering some mainstream exposure.

Undoubtedly, Day Bombs is pure theatre from start to finish, like travelling freakshow Circus Of Horrors put to music. Another single, They Lie, encapsulates the mood perfectly; Karlost’s vocal lunacy runs amok alongside a repetitive punky, scuzzy guitar riff. It typifies the band more than any other track, with the frantic musicianship and screaming vocal marrying with more straightforward, near-spoken nuttiness.

Flick The King bounces along from a tasty punk riff to a chorus that is guaranteed to encourage mosh pit mayhem, with vocals approaching animalistic. Ben mixes subtle, relatively quiet passages with bursts of thunder, a guitar heavy chorus and vocals ranging from the doomladen to the wailing to create rather a mixed result; and Legs is an intriguing effort, driven by a continuous thumping bass and pounding drums as the song builds into a crescendo for its chorus and cataclysmic climax of noise. So Drunk & Wasted recalls Queens Of The Stone Age musically, its stop-start structure creating a disjointed feel; the ear pummelling surprisingly ceases for Mister Mandolin as Karlost warbles alongside a solitary acoustic line that makes for a mellow moment that had scarcely seemed possible before this point. But album closer Senses returns to familiar ground, rocking its way along with heavy, grungey guitars; a thumping bass, clashing cymbals and an impressive lead guitar line that ghosts over the top meld together to form possibly the album’s best moment.

Day Bombs is best approached with care; initial thoughts will envisage the hurtling of the CD out of the nearest window but prevail and it will intrigue. There’s enough here to fuel nightmares, and Karlost’s vocal style is so distinct as to divide. For a band who struggled to find their identity, Day Bombs still feels like a stepping stone. But it marks a defining moment in that they appear to be on the verge of nailing that identity.