by Ben Devlin
published: 6 May 2021 in Album Reviews
Tweet 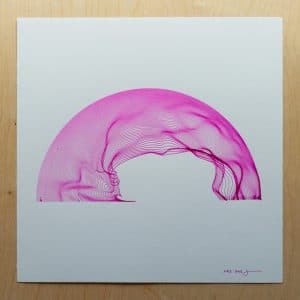 The coronavirus pandemic, and the response of the world’s governments to it, has thrown restraint into the spotlight. There’s been legal restraint – no seeing your friends or family, no sex with people you don’t live with – and self-restraint, as people try to calibrate the risk to themselves and others in mundane things like navigating a supermarket aisle. Simian Mobile Disco‘s Jas Shaw has been shielding due to an underlying health condition, and this self-restraint bleeds into his series of Sollbruchstelle EPs recorded over the course of the pandemic.

Sollbruchstelle I focuses on dreamy synth lines and minimalistic arrangements drenched in reverb, tried-and-tested ambient comfort food. An Argument That Takes More Than Five Minutes is a key example of restraint, its angelic pads muffled and an impassive layer of static on top, chords swelling dramatically within their EQ parameters, while It Turns Into A She displays a more woozy, abstract approach with an ominous rumbling underneath.

Sollbruchstelle II is harsher, with more emphasis on tones that pierce through the mix. I Wig On A Cone is the most challenging song in the collection: granular synthesis turning the pulse into an insistent high-pitched whine, sporadic bass hits perfect for testing cinema speakers, and a vague sense of tonality stifled by the noise. Elsewhere The Revenge Of Noise On Harmony climaxes to a pure wall of sound, brash sustained notes piling on top of each other to a transcendent degree.

Sollbruchstelle III is dominated by rhythmic momentum and intricate ostinati, with synths inspired by IDM’s golden age. A Man With Two Watches is a definite highlight, the cascading motif coming up for air at certain polyrhythmic moments and timestretching effects adding a touch of disorder to the almost hypnotising sequence. Double Stop features spasmodic melodies which are dead ringers for early Aphex Twin or Autechre, along with some beautiful bell sounds that give the track an ornate splendour.

The EPs are not strictly segregated along these lines, but they have an internal cohesion as well as sounding pleasant in succession. The sound design is quaintly simple – a flanger here, a low-pass filter there – but these effects are deployed tastefully and with fascinating results. So many landmark musical moments have been created with limitations which would baffle someone used to a busy Logic session, and Sollsbruchstelle does a fine job of reminding us that musical restraint is no bad thing.