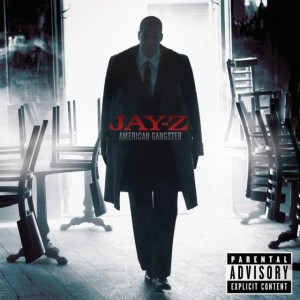 It’s always a challenge picking up and listening to an album ‘inspired by the motion picture’ without seeing said movie. However in Jay-Z’s case I don’t think indulging in Ridley Scott’s latest fare is by any means a prerequisite.

Despite the intro being borrowed from the trailer to American Gangster it essentially reclaims the genre Shawn Carter helped to pioneer from the studio gangstas and plastic pimps that hip-pop is swamped with.

“To be a gangster, swagger is not a must – it’s a liability, a cliché, a bad seed. Cut the bullshit – you know if it wasn’t for this; there would be no that”. By the time the Marvin Gaye infused American Dreamin’ bursts, the sound is classically fresh, a progression from Reasonable Doubt, but without the 11 year gap.

No Hook is classic gangster rap: “this is not for commercial usage / please don’t categorise this as music”. It’s Jay’s life, whether or not it was inspired by Denzel Washington’s character, the tension in the track is organic. By the same token the enjoyable Roc Boys is as much about Diddy and Jigga letting loose and enjoying themselves as it is about record sales.

The Neptunes stamp their production authority on I Know, which kills the vibe somewhat. It’s not that it’s a bad track (it could have sat comfortably on Kingdom Come) it just changes the tone for the songs that follow. Rather more of an interlude than album filler but anyone with an attention span similar to mine will struggle to keep interested. Of course, in true Jay-Z style, it all gets pulled back together in Say Hello.

It’s a more controlled and less defensive version of The Blueprint’s Renegade where Jay and Eminem launched an attack on popular perceptions. Six years on and there’s a real sense that Jay-Z, rightly, doesn’t care. Instead he lets us know, very calmly that he’s got his “mind on my money, money on my mind/ If you owe me ten dollars you ain’t giving me nine/ Ya’ll ain’t give me 40 acres and a mule/ So I got my Glock 40, now i’m cool.”

Blue Magic isn’t American Gangster’s strongest moment but it is both introspective and retrospective – in its simplicity, it acts as a final curve-ball before the title track closes the album. Do not believe the marketing hype billing American Gangster as a ‘concept album’ because that moniker does not actually make any sense. Instead, buy this album to restore your faith in the genre. This is gangster rap, not gangsta rap – listen to it and it will become evident that the difference is not a subtle one.

On Kanye West‘s Last Call we’re told about his introduction to the big boys table and he says “I was thinking like, man, I really wanted more like of the simple type Jay-Z, I ain’t want like the, the more introspective, complicated rhymes”. Well Kanye, American Gangster shows that Jay-Z can have his cake and eat it because everything he touches inevitably turns to gold.