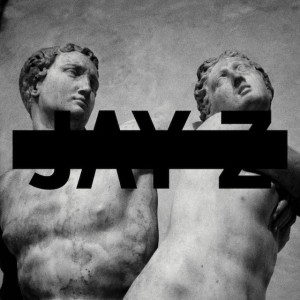 The bad taste Watch The Throne left in many listeners’ mouths was not so much a function of the mediocrity of the content itself, but instead of the awful timing of the album. Almost the anti-Occupy Wall St, Watch The Throne was a borderline morally irresponsible, braggadocious display of wealth during economic depression.

And one from two of hip-hop’s biggest and most talented stars who were trying to sell rather than trying to provoke intelligently. Kanye West recently redeemed himself with the unmistakably brilliant Yeezus. Love him or hate him, West’s production on Yeezus is top-notch, tasteful, and carefully curated, and his most repugnant lines cannot be taken seriously (though what you make of his demands concerning croissants is, of course, quite the opposite…). Best of all, his poignant and observant lines hit you right in the gut – if they’re not making you laugh.

Now, it’s Jay-Z’s turn to redeem himself. But what he’s dropped instead is an album that doesn’t even pretend to be art; it prides itself on being, first and foremost, a multimillion dollar business deal with Samsung and, secondly, an even more mindless representation of the so-called “taste” that Hova has accumulated as he’s accumulated money. On Magna Carta… Holy Grail, Jay comes off as even more pretentious than Kanye. He may not stick his fist in her like a civil rights sign, but he’s done exactly the opposite of what he promised to do in the trailer for the album: stay himself amidst his wealth.

While Magna Carta… Holy Grail starts promisingly, with some good old Justin Timberlake sexy wailing on the lead track titled Holy Grail, Jay ruins everything when he sings the chorus to Nirvana’s Smells Like Teen Spirit. God knows how much he paid to use the rights to the chorus, but what’s most infuriating is Jay’s use of Kurt Cobain not to make a coherent or consistent point in relation to the rest of the song, but instead to simply show off that he can, in fact, buy the chorus. At least when Mad Men paid a bajillion dollars to use The Beatles, the song had an artistic, aesthetic, and chronological function within the episode. Jay’s use of Nirvana not only comes across as anachronistic, but he comes across as one of those celebrities at the MET’s punk fashion gala talking out of his ass about a genre of which he knows nothing. But at least those celebrities all adopted mohawks for the night. Jay just put on a $3,000 flannel shirt.

Next up is Picasso Baby. You’d like to think this song was anything but a laundry list of famous artists whose works Jay owns, probably because he read their names from a college student’s syllabus. Well, there’s always the next album, because Picasso Baby contains the following line: “It ain’t hard to tell / I’m the new Jean Michel / Surrounded by Warhols / My whole team ball / Twin Bugattis outside the Art Basel / I just wanna live life colossal.” Yes, Jay only likes owning art because it’s not just important to be rich. You have to seem rich. Later, he claims “I’m the new Picasso.” What are some of the similarities between you and Picasso, Jay? Is it the fact that you have a lot of money? Or that, if you weren’t with Beyoncé, you could walk down the street and pick up any girl you wanted? Because The Modern Lovers already covered that.

Elsewhere, Jay simply spits and doesn’t make much sense. On Tom Ford, he says, “I don’t pop molly / I rock Tom Ford,” apparently failing to realize that the two aren’t mutually exclusive. On past Jay-Z albums, you find yourself listening, identifying with, and rooting for an egotistical, talented, entrepreneurial, sharp, and inspirational man. On Magna Carta… Holy Grail, you find yourself an editor: pointing out where Jay clearly has no idea what he’s even saying. And even the songs that don’t include lyrical headscratchers, like the Frank Ocean featuring Oceans and Somewhereinamerica, whose beat is similar to but somehow less complex than that of Thrift Shop, aren’t at all interestingly produced.

Overall, some of the most effective commercial albums of the year, from Daft Punk’s Random Access Memories to Timberlake’s The 20/20 Experience, have put a contemporary spin on looking to the past. Timberlake’s Suit & Tie, which featured Jay-Z, was an irresistible champagne popping piece of old school soul with a respectable verse from Jay. On Magna Carta… Holy Grail, however, Jay is not looking back or looking forward. He’s looking nowhere except in his overcrowded closet, the switch in his brilliant brain in the “off” position.