by Ben Hogwood
published: 15 May 2016 in Album Reviews
Tweet 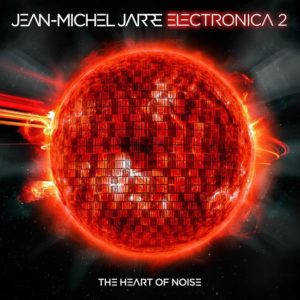 The power of music to help overcome adversity is astonishing at times. The Electronica project has enabled Jean-Michel Jarre to deal with a difficult period in his life, losing both of his parents and his publisher in a short space of time. Clearly that adds significance to an already personal release, but what does it do for his reputation as a pioneer in the field of electronic music?

A good deal, as it turns out. In choosing a wide variety of guests Jarre has shown his relevance as a producer both past and present. He has also managed to compose in a style to suit each of his collaborators, avoiding pastiche but also creating an album with a logical structure if a rather long one.

Meeting each of his accomplices in person no doubt aided the task, but so did his ability to manipulate keyboard sounds from soft, glowing electronica to fleet footed trance music. The first form we hear in association with Rone, Siriusmo and Hans Zimmer, with whom Jarre makes a powerful piece of cinematic orchestral music in Electrees. The quick stuff is at its most effective in Exit, a striking piece of work with celebrated fugitive Edward Snowden.

In the past this sort of pairing might have spelled trouble and overindulgence, but Jarre gets the balance right, provoking pertinent thoughts but stopping a long way from preaching. He does so with a few direct musical touches, starting the track off quickly but slowing down towards the middle, drawing the ear in as he strips the texture back for Snowden’s spoken word part. It is an effective tactic that yields a lasting bout of soul searching, Snowden’s thoughts on the intrusiveness of modern technology leaving a dark undercurrent.

Electronica 2 is not all so serious, mind. On the song As One, Jarre does a surprisingly good job of sending up the ‘together as one’ chorus of Come Together with a helium tinged makeover, recalling Armin van Buuren and David Guetta. Meanwhile Swipe To The Right, featuring Cyndi Lauper, is an anthem clearly aimed at Tinder users – though whether either Jarre or Lauper have used the dating service is doubtful.

The slower songs are not quite so effective, save for the subtly majestic work with Rone, but the listener still has the considerable luxury of indulging in Jarre’s keyboard pad sounds. A held chord from this source is still worth several from lesser musician, for there is something in his knack of voicing that gives his music an essential clarity.

Throughout his sounds have poise and power, and although the album is too long it does not often flag, for he is careful to fluctuate the colours used. Jarre himself appears as a vocalist for the very first time on Falling Down, which comes across as a poignant reference to the dark and difficult times of late.

Yet there is much light in this collaborative experience, which proves Jean-Michel Jarre remains a force to be reckoned with, keeping up with if not slightly ahead of the game. Electronica – in both its volumes – has reminded us both of his legacy and his influence, and it is encouraging to think this young at heart veteran still has so much more left in the tank.