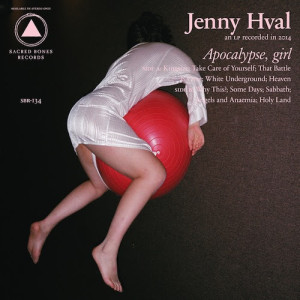 Jenny Hval is a Norwegian artist whose prolific and varied output spans EPs released in collaboration with other artists and under the name Rockettothesky, one novel, numerous pieces of journalism and four solo albums, of which Apocalypse, Girl is the latest.

There will be few more arresting openings to an album this year than Kingsize. Opening with a quote from the Danish poet Mette Moestrup (“Think big, girl, like a king, think kingsize…”), Hval intones her words as if she’s reciting an instruction manual. A pretty strange instruction manual as it turns out, in which we are told to “[use] the elements of dick to create a softer, toned-down sound”. (The first of many dicks on the record: in fact, the album might hold the record outside hip-hop for the greatest number of uses of the word.)

Kingsize is the stiffest, most formal track on Apocalypse, girl: it’s essentially a spoken word recital set to the barest of musical accompaniments. But it nonetheless encapsulates two of Apocalypse, girl’s defining characteristics: first, the preoccupation with the human body in all its wonder and ridiculousness and, second, its sense of humour.

On Take Care Of Yourself, Hval lists various activities required for personal upkeep, sounding thoroughly despondent as she sings “being healthy, being clean… shaving in all the right places” before her mind wonders on to other forms of, um, self-care: “I grapple my cunt with my hand that isn’t clean… Am I taking care of myself now?”

Sabbath is similarly replete with corporeal imagery (“Some days I feel like my body is straightened / held up by thin braces”) and ruminations on sex (“It’s easy to think about submission / but it’s not about submission / it’s about holding and being held”). On The Battle Is Over, Hval half-sings, half-speaks about the ageing process over a shuffling, gospel-tinged backing, while later on the extraordinary, skyscraping Heaven she notes that, at 33, she’s now “Jesus age”.

All of which might make Apocalypse, Girl sound like a trying listen. But there are melodies here – not necessarily melodies one would sing in the shower, but beautiful, lilting melodies nonetheless. The album was produced by Hval’s compatriot Lasse Marhaug – someone who’s made a name for himself in the fields of extreme metal and drone music. Here, however, Marhaug deploys a lightness of touch that’s the perfect foil for the intensity of the lyrics. The instrumentation is confined to warm blasts of organs, synthesizers, tablas and the occasional harp; only on the interstitial tracks White Underground, Some Days and the long, droning intro of the eight-minute closer Holy Land do Marhaug and Hval allow the music to take precedent over the words.

Apocalypse, Girl is the thrilling sound of an artist expressing herself without the slightest hint of self-censorship. It’s one of the year’s most individual and original albums.