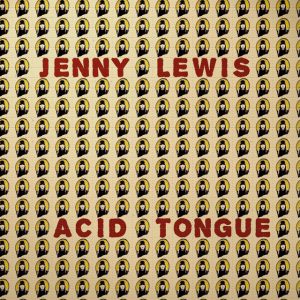 Jenny Lewis‘ first solo excursion from Rilo Kiley was done in the company of The Watson Twins and the result (Rabbit Fur Coat) was rather enchanting. This, her twin-less second offering, is an eclectic thing with a strong country flavour that displays the same strong capacity for story-telling that has featured in her earlier work.

Acid Tongue sees her wallowing in Americana with collaborators including Zooey Deschanel, Chris Robinson (from The Black Crows) and even Elvis Costello. It’s an album that requires repeat listens to really get a handle on, and not all the songs quite work. Case in point: The Next Messiah, a kind of musical collage featuring three songs in one, which comes in at around the nine minute mark.

It begins as a rhythmic county-tinged thing about cocktail waitresses and race car drivers before changing pace twice over before the end, and isn’t quite capable of sustaining itself over that length. But, such quibbles aside, the atmosphere of the album grows on you, the lilting harmonies, the narrative power of the song-writing, it all casts a spell, soon sucks you in.

And when it works, boy, does it work. Opening track Black Sand is a fragile and evocative song that showcases Lewis’ voice: crisp and clean with a sharp, seductive edge. It’s a voice you could drink over ice on a hot day.

The same goes for the plaintive Pretty Bird and Acid Tongue, the absolutely gorgeous title track, with its minimal guitar, moving harmonies and appealing air of Joni Mitchell. Then there’s Godspeed, a song about the frustration of trying to advise a friend in a messy relationship (“You won’t let me help you, why won’t you?”) and the poppy See Fernando with its addictive hand claps.

Carpetbaggers (which I recollect from some dimly lit recess of my memory is a term for outsiders moving in – specifically from the North to the South – for political gain) sees her going down the country road once again, joining forces with Elvis Costello and his distinctive nasal twang en route.

Badman’s World, with its gentle fizz of strings, sees Lewis singing about murky things in a too-sweet voice and the bluesy and self-explanatory Jack Killed Mom, about a lad called Jack who did a bad thing to his momma, is hijacked half way through by a chap with gravely Nick Cave tones before exploding into a proper cowboy-booted stomp at the finish.

It’s not the most instantly winning of albums, but its rewards become evident after repeated listens, its subtleties revealing themselves like an unfolding paper fan. Ambitious, eclectic and, at times, very beautiful, it’s the very definition of a grower.