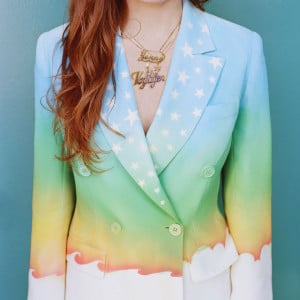 It’s been six years since Jenny Lewis’s last solo album, but she’s by no means been sitting twiddling her thumbs. Since 2008’s Acid Tongue, she recorded another album, 2010’s I’m Having Fun Now, with her partner Johnathan Rice – under the moniker Jenny and Johnny – and toured with The Postal Service.

This of course means that she’s taken the backseat for a while, not calling the shots in the way she did with Rilo Kiley and her two previous solo outings. Which might explain why she called in big name producers to try and steer things a different direction. Her first record, Rabbit Fur Coat, was beautifully rootsy, tinged with earthy country, while Acid Tongue was full of twangy Americana. Both variations of a theme, both fantastic records. The Voyager feels more like a précis of the Lewis back catalogue, bringing together all of the sounds she’s tried. The sound is nowhere near as cohesive as her previous albums. In places it works, at other times that continuity and picture building is missed.

When it works it’s great, and there are some brilliant, big songs just waiting to burst out from car radios in there. Take opening track Head Underwater; is almost a homage to her childhood Hollywood roots, it’s slightly overblown, a tad dramatic – a wind-swept take on pop music.

But the fascinating turn is her writing. Her lyrics have taken a turn for the seriously dark and, while the mainstay of pop topics – death, depression, lost love and fragile relationships – all get a look in, there are some deeply confessional moments that are striking in their honesty. She’s spoken about suffering from insomnia during the writing of the record, and there’s a sense of desperation in her lyrics that makes it easy to conjure up images of a desperate Lewis sitting, scribbling through the night. The Beck-produced Just One Of The Guys deals with – at the age of 38 – being childless. It’s brave stuff and also one of the most musically daring tracks; woozy with drawling country lines, it sees Lewis step back from the wholesome, American Pie vocal that dominates the rest of the album and seems at odds with its themes. These troubled words are delivered with a glossy sheen that misses the edge that would have graced the songs back in the Rilo Kiley days, when bitter lyrics would be escape in a sing-song voice through almost gritted teeth.

That extends to the production – the majority coming courtesy of Ryan Adams – too. It’s a strange combination; cheery songs with such angsty subject matter. You can see what Adams was aiming for, a sort of ironic, wholesome feel, but it doesn’t quite sit right – there’s not enough to hint at the darker side. Songs like Love U Forever and The New You are just too sugary to be palatable. The title track feels the closest to her natural sound, with an old country ballad approach; it’s an unsettling sing-along which isn’t afraid to be down and out sad.

The Voyager is less of an addition to her back catalogue than a summary of her work to date, dipping into different eras of Lewis, and not settling on any. It feels like she’s settling back into things, nailing the writing but not quite decided on a sound yet. It’s not without its charms but, after the long wait – and with so many teasing glimpses of what was to come – it’s hard not to feel slightly let down by it.