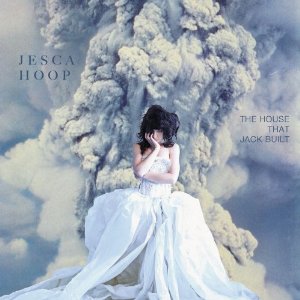 Jesca Hoop’s last album, Hunting My Dress – her first since she’d upped sticks from LA to sunny Manchester – created quite a storm even before anyone had heard it. With high profile fans shouting her praises it was eagerly anticipated, so when review copies hit desks and the reviews lived up to the hype, she must’ve breathed a huge sigh of relief. Now a known entity, she’s found her feet and relaxed into a sound that blends the kookiness of her first releases with a new poppy sound that could endear her to those who found her back catalogue a little intense.

Her famous backers were, of course, Tom Waits – for whom she worked as a live-in nanny to his three children – and Elbow front man Guy Garvey. As Hoop packed her bags to head over to UK, in lieu of a traditional job reference, Waits provided her with a reflection on her music – “Jesca Hoop’s music is like a four sided coin. She’s an old soul, like a good witch, a black pearl or a red moon. It’s like swimming in a lake at night.” It’s a quote that, unsurprisingly, made people sit up and take notice. Garvey’s assistance was somewhat more practical; after hearing her song Havoc In Heaven on a mix tape given to him by Leigh Watson of The Watson Twins, he was smitten and tracked her down to ask her to appear on his 6Music show and to support Elbow on a US tour.

Whether her initial break was down to luck or steely determination, this time Hoop’s on her own, and the two-and-a-half-year gap between Hunting My Dress and The House That Jack Built have given her time for reflection. Living in Manchester hasn’t dampened the natural themes that shape her songs; there’s still an underlying earthiness to them, with layers of chanting over cuts of traditional folk, but there’s a new bittersweet edge installed to polish down the kookiness.

Take the album’s first single, Born To, which sees her wrap musky vocals around rustic, earthy lyrics – “Spin her out of dust into rock and fire, Oh Holy water, Throw her to the earth, Through the burning air…” – and sounds that flip between upbeat and moody and suspicious. It’s a bittersweet opener that sets the tone for an inquisitive album that doesn’t know quite how it feels.

Vocally Hoop sits somewhere between the velvety purr of Suzanne Vega, the world-weary Thea Gilmore and the kooks of PJ Harvey. The latter is heard most in the album’s most surprising track, Hospital – which starts off with a Girls Aloud-style chanting intro and is probably the poppiest thing she’s ever released. A patchwork of pop songs, it’s sits in the feel good, sing-along portion of the record, but still maintains a cautious, suspicious air, as like a gently whispered warning, she reminds us: “This is not a fairytale with a happy ending.” Ode to Banksy has a similar, playful feel, and does exactly what it says on the tin. “Oh my mystery man, you’re so provocative and underground…you come invisible to paint the town.”

Elsewhere, some of the more tribal, occult-influenced themes from her first album Kismet seep through. Dig This Record and Peacemaker especially, bring out a huskier vocal, while DNR ditches the carefully chaotic sounds of earlier in the record for a straight forward fluttering acoustic track. Deeper Devastation is probably the best one-song introduction to Hoop; a growling storm with gentle tribal chants sitting alongside her soft, suspicious voice, “You can’t trust a human being to do the right thing”, she warns – fuelling a haunting fire that somehow manages to be as upbeat as it is unnerving.

While it lacks the initial rush of Hunting My Dress, The House That Jack Built throws in surprises and twists and turns that are evidence of a satisfying progression. You never know whether the next song will be up, down… or a confused place in between.