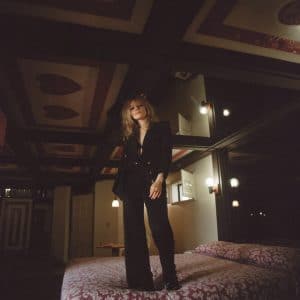 Jessica Pratt‘s third album feels like an almost conscious step up to another level. Quiet Signs sees the Los Angeles based musician, for the first time, step into a recording studio after creating her first two albums at home.

Some may fear that this may have resulted in a bland, more polished sound (indeed, Pratt herself has said this was a cause of anxiety for her through the album’s creation), but they need not worry. Quiet Signs bottles Pratt’s unique magic and makes it sound somehow even more spellbinding than before.

Opening Night sets the tone of the album nicely – a meandering piano instrumental that lasts just 140 seconds but instantly creates some wistful cinematic visions of couples walking in the rain ñ the idea of a soundtrack for a film that hasn’t yet been made is a well-worn cliche, but that’s exactly what Opening Night sounds like. As with the best of Pratt’s material, it’s simple but so effective.

It’s a template that’s well used throughout the album. The use of studio technology, and the appearance of San Francisco multi-instrumentalist Matthew McDermott allows Pratt’s palette to be broadened without losing her trademark spectral sound. As well as her voice and finger-picking guitar, you can hear synths, flutes and piano through the album, and it adds up to a lovely, well-rounded sound.

Pratt’s voice throughout is whispery, cooing and very reminiscent of Joanna Newsom at times – Fare Thee Well sees her sighing over a gently strummed guitar, while McDermott’s flute winds it way around the melody. This Time Around bizarrely starts off sounding like De La Soul‘s Eye Know slowed down and in a minor key, before going on to cast a woozy, narcotic spell over its three and a half minutes, while Poly Blue is reminiscent of Joni Mitchell‘s Herjira era in its cool, jazzy haze – high praise, indeed.

The only issue with Pratt’s idiosyncratic vocals is that it’s sometimes difficult to pick up what’s she actually singing. This isn’t a problem in itself, as Quiet Signs is very much an album of mood – there’s a blissful feel to Here My Love, backed up by snatches of lyrics like “he’s sincerely worn this weary heart…here my love, near my love”, while Silent Song, staying true to its title, is hushed and frail, although it’s possible to pick up lines like “here I’ll wonder, soldier on”.

Quiet Signs is, like the rest of Pratt’s oeuvre, not an album to seek out if you require a quick fix of a blast of noise. At just 29 minutes, it feels like it’s over before it’s even begun, and some people may be turned off by the minimal sound. Yet sometimes, a less full-blooded approach can bestow greater dividends – this is an album to sit with, to take in, and to fully appreciate its subtle and quiet beauty. It may not be her commercial breakthrough – someone as esoteric as Pratt could be waiting a while for that – but it’s certainly her best album to date.