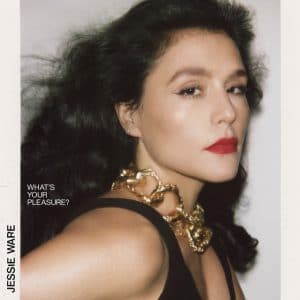 Jessie Ware has had rather the enviable sonic career. Her first solo album Devotion was released to much critical acclaim. Eschewing generic pop in favour of a more soulful and sophisticated sound, Ware was a gale of fresh air with her trademark sultry sass and poignant songwriting. This was cemented with her next album Tough Love which catapulted her into the mainstream. Her intimate third album Glasshouse, her third UK Top 10 collection, followed in 2017 but then a disastrous Coachella appearance seemed to signal a catalyst for a hiatus.

Ware started the acclaimed and tremendously popular podcast Table Manners with her chef mum Lennie. This accomplishment appears, from the evidence of her fourth album What’s Your Pleasure?, to have led Ware to rediscovering her musical groove.

Ware has touted What’s Your Pleasure? as the album to which she would like everyone to have sex, though fortunately she’s less fascinated with red light specials or the end result, but in the process. Produced largely with James Ford of Simian Mobile Disco, the album was precursed last year with the release of the euphoric Adore You. With its tonal shifts and production from Joe Mount of Metronomy, this is a breathy and sensual R&B deep house crossover redolent of Mount’s work on Robyn‘s last album. Yet, there are no sad bangers here, only overt, defiant anthems to provide a, er, banging backdrop.

The album opens with the slow-burning then pulsating Spotlight, with beautiful and breathy vocals channelling a more knowing Toni Braxton, leading to a gorgeous acid house-electronica denouement. This track sets the tone for an album packed with optimism and sybaritic disco dancefloor fillers turning the sex appeal up to 11. Ooh La La is replete with ’80s funk and chic with curious futuristic elements and more than a hint of Róisín Murphy, there are shades of Sheila E funk on Soul Control, whereas the title track is essentially Alison Goldfrapp having a dance-off with Donna Summer in a shimmering discotheque. In Your Eyes is a deconstructed State Of Independence of sorts, brimming with soulful strings, while elsewhere, Step Into My Life is a retrofunk sparkler with elements redolent of Rose Royce.

If it’s love you’re after, Save A Kiss is perhaps the album’s highlight. Starting off evoking the beginning of the tremendous Love Fight by Dannii Minogue, the track morphs into a gorgeous string-laden and bassline-driven dancefloor banger with Ware’s vocals pure audio mescaline in the sublimely uplifting chorus. Things turn a little darker on The Kill with its Bat For Lashes-esque nuance before we reach Remember Where You Are, a glorious and soulful finale, echoing the celestial ’70s classic Les Fleur by Minnie Ripperton in the opening bars and the chorus with an enveloping gospel feel forming a homecoming of sorts, with Ware longing for comfort as the high from the fantasy wears off.

Perhaps the only thing to mourn here is that there is a distinct lack of Ware’s soulful and bittersweet ballads, yet we can take solace in her already impressive back catalogue of these, and it is rather wonderful to hear her channel her wistful talents into sultry dancefloor fillers. The result is surely one of the best pop albums of 2020, and is possibly Ware’s finest to date. A sensual delight, What’s Your Pleasure? is the ultimate in post-disco gratification.