The Jesus And Mary Chain – Damage And Joy 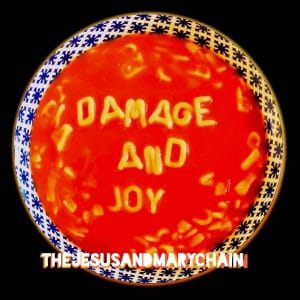 Nobody has yet written the rulebook for how to manage the ageing process for leading lights of the alternative rock movement. In most cases, the problem never arises. The few that remain and age gracefully – Nick Cave and PJ Harvey spring to mind – rely on a constant output of material that documents their gradual, sequential changes. The trick of never disappearing buffers against the sudden jolts that have afflicted those with prolonged absences from the public eye. In hindsight, The Jesus And Mary Chain may regret the 19-year gap between albums for this very reason.

They are, in truth, an anomaly in the first place. The jolt between their classic debut Psychocandy and its follow-up just two years later, Darklands, surprised everybody, with the serrated, abrasive production of the former giving way to a smoother, warmer sound on the latter, a direction which they allowed to dominate the rest of their original catalogue. It would be unreasonable and likely unwise to expect a return to the DIY carnage of their early days, and yet in the subject matter of this new set of songs, they do appear to be attempting to recreate their teenage sense of counterculture and anarchy – a depiction of rock’n’roll that is barely tolerable in adolescence and downright embarrassing as you approach 60.

Damage And Joy, their first studio album since 1998, comes across as a lunge for relevance from a group that have missed several steps on their own evolutionary journey. In the absence of any natural progression in the Reid brothers’ writing, we have an attempt to recreate what they perceive as their original selling point. Suffice to say, Psychocandy this ain’t. If their lyrics were ever the root of their popularity, it wasn’t because they coughed up lines like, “I got a heart full of evil, a soul full of rock ‘n’ roll”, the recurring motif in Get On Home, or “The two of us are getting high, we don’t need drugs cuz we know how to fly” from The Two Of Us. It’s more latter day Oasis than young JAMC.

Lead track Amputation is a pedestrian, plodding number with Jim Reid’s vocals reminiscent of Richard Ashcroft: “I’m a rock ‘n’ roll amputation,” he sings, perhaps acknowledging that an essential part of what they used to be is permanently missing. Tracks like Facing Up To The Facts make the cut (and at 14 songs, there was surely room for trimming down a few), with its insightful mantra of “I can’t find a hole I can put my erection/I hate my brother and he hates me”. It’s the definition of getting by on fumes, the very last remnants of having anything to say whatsoever.

There are better moments, though. All Things Pass is insurgent, suddenly presenting a band that is driven to have their say, to express their presence. It might, on further analysis, be a purely Darwinist survival instinct, as they sense their demise as a band approaching rapidly, but nevertheless, it sounds alive and insistent. William Reid’s guitar parts are suddenly swinging punches, Youth’s production (his first time with the band) compact and direct. The track pulls of a big finish too – life is still in there.

Elsewhere, they bring in outside voices to lend a sense of vitality: Sky Ferreira on the still lacklustre Black And Blues; Bernadette Denning on Always Sad, an honest and endearing, Lemonheads-like lazy pop tune; and, best of all, Isobel Campbell guests on two tracks, the better of which is the lush, elusive Song For A Secret. “Too old to crucify, but too young for suicide,” she sings alongside the younger Reid, recapturing a little of the close-to-the-bone writing that boosted their initial rise.

Damage And Joy is not without flourishes that remind you that this band was great once. But the damage is more abundant than the joy, and too often on its bloated tracklisting do they fall back on clichés and ageing rockstar posing. Musically there is little to remember, lyrically some of this is challenging to forget. For a 19-year wait, this is a mild payoff indeed.

The Jesus And Mary Chain MP3s or CDs

The Jesus And Mary Chain on Spotify