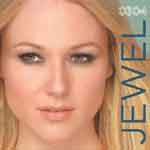 Jewel. Stunningly beautiful, with a voice to match, a favourite of Jools Holland, and many, many platinum records adorning her walls. This much is well known, although exactly who her multitude of fans are is perhaps slightly more elusive.

0304 is an enjoyable 54 minutes of pop, full of catchy, chirpy songs, proving Jewel’s ear candy as well as eye candy credentials. The album could be the soundtrack of a summer’s day at the beach, or for getting ready for a girly night out.

The songs are all, some might say relentlessly, upbeat, with only Haunted breaking the pop mould at almost five minutes long, a reflective tint in the verses (before returning to a lively chorus), then an instrumental bridge at the end.

Jewel seems to be drawing inspiration from a variety of female acts, with a chameleon-like voice and tunes reminiscent of Shakira (Stand, Intuition), Destiny’s Child (Yes U Can), Madonna (Run 2 U) and even Sixpence None the Richer (Doin’ Fine). Whilst this makes for a fun listen, it leaves the impression that, despite her years in the business and her undoubted successes, Jewel hasn’t yet fully established her own style.

Apart from the use of “txt msg” in the song titles, which is more of an irritation and undoubtedly a sign of the teen market Jewel is seeking to attract, the only downside to the album is the lack of depth. This comes across in that there are no slower ballads or rockier tunes to break up the mix a little, and in the lyrics (“It’s a shame / There’s no one to blame / For all the pain” being one of the trite rhymes on offer).

What is a shame is that since the Top 40 chart shows us that pop songs of this type can be sung by those who can barely even hold a tune, this is a waste of Jewel’s undoubted vocal talents.

Whilst the drums beat constantly in their own pop-tastic way, Jewel rings the changes elsewhere with an accordion playing on Intuition, and strings being plucked on Fragile Heart. Her voice ranges from emotive in 2 Find U (before heading back to a pop chorus), breathy on Fragile Heart, to strong, almost strident on the Shakira-style songs, while America shows that she really can sing. However, she should have learned from Robbie that semi-rapping over the music should be left to the professionals.

0304 is a marked departure from Jewel’s previous, more acoustic efforts, and appears to be a deliberate attempt to reposition herself firmly in the middle of the pop road. Whether what she is offering is distinctive enough to appeal to new fans, without alienating her old fans, is another question. There do not appear to be any hidden, “killer” singles, and where there are catchy chorus tunes they tend to involve lyrics that are too cringe-worthy to sing along to. Nevertheless, this is a frothy, fun piece of plastic pop, but probably one for the girls.