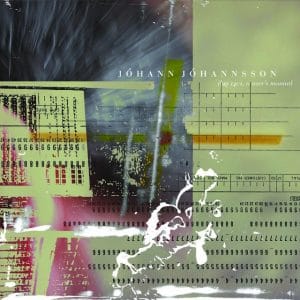 One can only hazard a guess as to the reaction at chez Jóhannsson when word spread about the imminent arrival of IBM 1401, the world’s first ‘mass-produced digital business computer’ in 1964.

Back in what middle-aged people are already referring to as ‘the day’, the arrival of the first affordable calculators into the family home induced a level of wonderment now only matched in awe by endless incidents of modern tragedy. Like lots of people buying Shakira recordings, for example.

What garlands then, nay, what bunting were hung on the Reykjavik streets when the room-sized hard-drive of the IBM 1401 first fired into action? And how, a nanosecond later when it doubtlessly crashed, did they find the CTRL-ALT-DEL function without the aid of a QWERTY keyboard?

On paper, Icelandic composer Jóhann Jóhannsson‘s decision to dedicate a suite to this very artefact may seem a strange one. However, Jóhannsson’s father had been the 401’s chief maintenance engineer on the original system, and discovered a method of programming music from the machine, a feature unintended by the Third Reich’s IT supplier of choice.

Eschewing any expected atonality and vogueish electronica, IBM 1401, A User’s Manual has been performed around Europe with a full orchestra and in collaboration with dancer / choreographer Erna Omarsdottir. As the original system was taken out of service in 1971, this suite is very much a cycle of birth, rebirth and reboot.

Building on the tapes of sine-wave tones recorded by Jóhannsson Snr, IBM 1401, A User’s Manual is a work of soaring melancholy mitigated by the discovery of a kind of new life.

Jóhannsson and Ormarsdottir approached the project with a belief that a computer could have a soul (or at least simulate one), and the gently unfolding passages of fortissimo and pianissimo imply a inner voyage of new sensations and fresh modes of communication, where its anyone’s guess if Jóhannsson Snr had been playing the computer, or the computer him.

Contrasting the clipped instructional detail of a technical manual with the butterfly metamorphosis of the 401’s first stirrings, Jóhannsson pulls off a master stroke of poetic disparity between the mechanical and the spiritual. Somehow Douglas Trumbull’s choreography for 2001:A Space Odyssey is recalled, when techie hardware met Strauss’s Blue Danube Waltz in a symphony of space.

Part 2 is led by a set of bespoke programming instructions that swiftly assume a hoary aspect. Mundane directions such as “The electric unit consists of cams and emitters, digital filters and relays” are framed by Jóhannsson’s searching strings like a call to prayer.

As the final piece comes to a close, quoting Dorothy Parker’s Two-Volume Novel, its hard not to read Jóhannsson’s thought-provoking work as an exploration of primal themes. The human desire to animate the inanimate is a story of atavistic reach, to find or create something that can tell us about ourselves.

The suite’s unavoidable melancholic strains may be a hint that whatever technological innovations await us in the future, this may well be a lost cause. The first piece begins with the computer’s repetitive four-note sequence beaming out to an empty virtual universe, a very human sense of isolation.

Of course such random theorising shouldn’t fail to distract from Jóhannsson’s moving work. And if artificial intelligence ever learns to ‘sing’ like this, well it’ll be like Aretha Franklin never happened.