by Ben Hogwood
published: 23 May 2011 in Album Reviews
Tweet 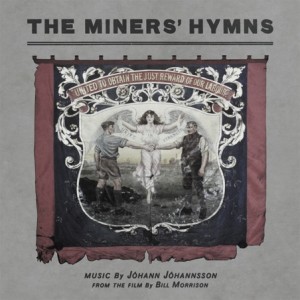 The plight of miners in the 1980s is not necessarily a subject you would expect an Icelandic composer and musician to get excited about. Yet for his latest opus, Jóhann Jóhannsson has taken an incredibly personal view of the plight of Durham workers in that inauspicious period of recent English history, teaming up with filmmaker Bill Morrison to produce a studied story, the sum of whose parts is considerable.

The intricate construction bears close inspection. Jóhannsson wrote The Miners’ Hymns to commission from Durham County Council, directing his compositional thoughts towards the first performance and subsequent recording, both of which were made in Durham Cathedral. Rather than use strings and play to recent strengths, he opted for brass, forging a link with the colliery bands of the north of England. Electronics were used too, as sparing additions to the sound, recorded when the cathedral was empty.

Such painstaking attention to detail reaps considerable rewards in the score, which is an emotive and often extremely tense exploration of some truly difficult times. Jóhannsson possesses an acute awareness of the pain and strife often experienced by the miners and their families, expressing these through remarkably simple yet fiercely concentrated passages for the brass, often written as chorales that shift slowly through time, like the movement of some great mining machinery.

The music is sombre for the most part, at times strangely calming. Jóhannsson uses the great space of the cathedral to his advantage, cleverly placing the brass for spatial effects that give the third number, Freedom From Want And Fear, an extra dimension, while in There Is No Safe Side But The Side Of Truth the trumpet’s ascent feels like a torch suddenly shining upwards, revealing the true scope of the space in which we find ourselves.

The tension crackles in An Injury To One Is The Concern Of All, its electronic whoosh gaining intensity like escaping air, finally releasing itself with a wall of sound as the brass and cathedral organ combine in a mighty oration. It is to Jóhannsson’s credit that the tension is maintained even after this outburst, the trumpets required to play held notes that lead the listener’s ear to hang on every progression. The music here seems to take its lead from Benjamin Britten, replicating the ability to move from single lines to great, cavernous spaces in his War Requiem.

Best listened to in silence on a home stereo with cinematic projection; this is a remarkable achievement from Jóhannsson, and a welcome change from the string-drenched sound that has become ubiquitous in modern film scores. Using brass in the way he does brings an essential frailty to the score, capturing exactly the subject matter and the venue in which it is performed. It all adds up to a remarkable portrait of northern England in the 1980s from an Icelandic who has immersed himself in the culture. Viewing the film in the special edition version of The Miners’ Hymns only enhances the experience, setting the seal on a remarkable underground achievement.