Jim Ghedi – In The Furrows Of Common Place 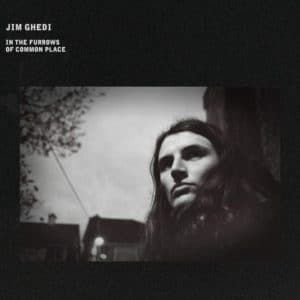 Over the past few years, Jim Ghedi has steadily built a reputation as one of the foremost young folk musicians in the UK. Hailing from Sheffield, Ghedi first drew acclaim for his mesmerising acoustic guitar playing, particularly on his outstanding collaboration with Welsh 12-string maestro Toby Hay, 2018’s The Hawksworth Grove Sessions.

His new record, In The Furrows of Common Place, continues Ghedi’s development into a folk singer-songwriter with a more varied sound and range of lyrical themes which started on A Hymn For Ancient Land, also released in 2018. While the latter album was very much focused on exploring the natural world and Ghedi’s relationship to it through his music, In The Furrows of Common Place brings us tales of human lives rooted in communities through the ages, drawing on sources including the poet John Clare and the writings of fellow South Yorkshireman Barry Hines, best known for giving us the novel – A Kestrel For A Knave – that inspired Ken Loach’s timeless Kes.

Recorded with a band of four at Black Bay Studio, Kirkibost, on the Outer Hebridean island of Lewis, what’s most striking about Ghedi’s approach is its bold directness, a far cry from the delicate finger-picked arpeggios of his earlier work. Take for example Lamentation Of Round Oak Waters, a passionate denunciation of tree felling in both historic and contemporary settings, on which Ghedi’s powerful voice soars defiantly over a menacing drone that sounds like it’s rising from the earth itself. Ah Cud Hew, written by the Durham folk singer and former miner Ed Pickford, uses the ageing of the song’s narrator as an allegory for post-war deindustrialisation and is sung by Ghedi and his band unaccompanied, with the starkness of their call and response vocals all the more impactful for it.

There are just two instrumental tracks, the evocative guitar and fiddle workouts of Mytholm and Beneath The Willow (Part II), and while there are quieter moments – the lovely, lilting ballad Stolen Ground is one of the highlights – even here, the song’s restrained anger is palpable, with Ghedi railing against the disempowerment of the working classes: “And we’re voiceless from their policies/And we’re moved on for economy.”

While perhaps lacking the simple yet intricate beauty of his purely instrumental work, In The Furrows of Common Place is another strong release from Ghedi, and fans of Chris Wood, Alasdair Roberts, Seth Lakeman and other modern folk luminaries will find much to enjoy in this confident and atmospheric collection of songs.