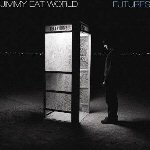 Jimmy Eat World are back with another fine musical offering after a two year break. But trust me, it was worth the wait. This album is a pleasure to review, if not the easiest one. There are so many genre variations on this album each song almost deserves its own separate review. Anyway, all whinging aside, lets get stuck into what is to be the most musical album from Jimmy Eat World to date, and that’s a difficult feat given that these are the band that turned out Bleed American in 2001.

The album begins with no hesitations literally bursting into the album title track, Futures. This track shows the band living up to their emo based pop categorisation – the first thing that comes to mind as the first track advances through is; “That’d be a great single”. Then again, you find yourself saying that mid way through every track on the album.

The next track, Just Tonight, is yet another test of how loud you can switch up your stereo. It was clear from listening to Bleed American that vocalist Jim Adkins had an immaculate voice, and to place that over fast growling guitars provided by axe man David Campbell on the first two tracks leaves a glowing hope that the follow up tracks will do as much damage to your ear-drums.

This however is not the case. Tracks such as Work, Kill, and The World You Love could all be placed quite neatly on a commercial radio station, and have no notice taken of them. These tracks work on a lower tone than the initial explosion of the album. It’s a change from the first album, but a positive one at that.

This is now where track six, Pain, the first single from the album comes into play. Pain follows in the formula footsteps of this albums predecessor by way of placing that ‘Jump The Hell Up’ ingredient into every second of the song. Pain isn’t quite like the biggest hit from the Bleed American album but still has the same edge.

Delving further into the album, Drugs Or Me sees Adkins agreeing with Richard Ascroft from The Verve‘s The Drugs Don’t Work, albeit in a different style of music.

To round it all up, this is a fantastic and very well produced album with more highlights than a blind dancing midget show. To be considered better than Bleed American isn’t really an issue, the more you listen to the album. Futures should be appreciated for being something great, and it’ll depend on your own tastes after that – this is just as good an album as its predecessor but fans may take time to get used to the different sound.