JJ Doom – Key To The Kuffs

by Thomas May
published: 20 Aug 2012 in Album Reviews
Tweet 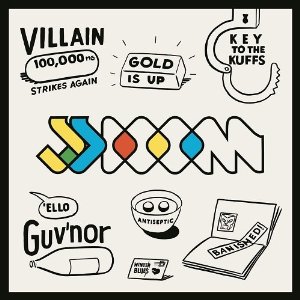 It is now over eight years since Daniel Dumile teamed up with the visionary producer Madlib to record their classic album Madvillainy. Long since canonised as one of alternative hip-hop’s most enduring and idiosyncratic works, the record is a labyrinthine patchwork of jazzy, soulful beats, dutifully dusted with scatterings of nostalgic vinyl crackle. For the majority of Madvillainy, as with his latest release Key To The Kuffs, Dumile assumes his super-villain alter ego MF Doom (known here as Doom), delivering a stream of intelligent, witty wordplay in his trademark drugged-out flow.

Key To The Kuffs has a similar dynamic to that of Madvillainy, being another collaboration of Dumile with an established producer, this time the lesser known Jneiro Jarel. What made Madvillainy such a memorable and significant record was the unprecedented level of synergy between the two artists involved: Madlib’s lovingly textured production fused with Dumile’s complex lyricism, arriving at an intricate and complimentary interdependence which carried the music far beyond a mere combination of disparate artistic voices. The pairing of Dumile with Jneiro Jarel, dubbed JJ Doom, however has garnered more mixed results; Key To The Kuffs is a ballsy and hyperactive, yet frustratingly inconsistent, album.

With the production handled completely by Jneiro Jarel, this record finds Dumile on blistering form at the microphone; each song is packed with abstract turns of phrase punctuated by moments of dark humour and wry cynicism. In the absence of an overt narrative thread or indeed any unambiguous meaning whatsoever, Dumile’s lyrics explore the intricate relationships between the sounds of the words themselves. Alliteration, assonance and consonance abound; these lyrics are sound-poems of formidable creativity and rhythmic control. On the acoustic guitar driven GMO, Dumile’s vocals are afforded such generous breathing space that they seem to take on an almost melodic quality, assimilating into the musical texture in a succession of sighing cadences.

There are moments on Key To The Kuffs however, where Jneiro Jarel’s production presents something of an opposition to Dumile’s vocals. On lead single Banished, the energetic beat sits uneasily next to Dumile’s twisting procession of clashing consonants, saturating the soundscape with rasping, monochromatic synths. As his vocals become increasingly suffocated by the surrounding activity, Dumile attempts to redress the balance by intensifying his delivery to the point where any notion of subtlety and contrast has been all but abandoned. On tracks like this, the technicality of Dumile’s vocals is certainly impressive but such an insistent barrage of words, unchanging in dynamics and tone, has more than a tendency to grate over the course of the album. These occasionally conflicting contributions of Dumile and Jneiro Jarel belie a faint sense of antagonism at the heart of the JJ Doom collaboration, ultimately detracting from Key To The Kuffs more successful ventures.

As is so often the case when an artist makes such a definitive statement in their career, Dumile’s moment of striking inspiration on Madvillainy has become isolated, frozen in time to act as a measure of quality by which all of his subsequent works are to be judged – and indeed by which his previous works are to be retrospectively considered. Regardless of any differences in in aesthetic and artistic vision, all of Dumile’s albums are placed in direct competition with that record of 2004. As such, a regrettable fate has befallen his entire output: as often dismissed as throwaway and gimmicky as it is, perhaps more fairly, recognised as a brilliantly creative and eccentric, if somewhat uneven, body of work. Whilst it is certainly unlikely that Key To The Kuffs will do much to alter prevailing opinion towards his work, the record will serve as a worthy addition to Dumile’s increasingly fascinating discography.

More on JJ Doom
JJ Doom – Key To The Kuffs