by Jude Clarke
published: 5 May 2015 in Album Reviews
Tweet 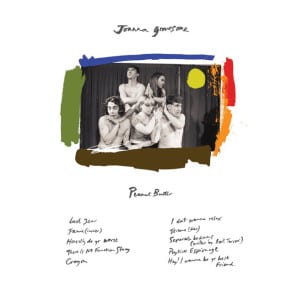 And that, in fact, is a pretty good summary. Literally both short – with a total running time of just 25 minutes (and that’s with 10 tracks) – and distinctly sweet thanks to Alanna McArdle’s vocals (of which more later), the band manage, once again, to blend the quirky allure of indiepop with elements of something more satisfyingly gritty and noisy.

Opener Last Year sets the tone: bouncy beat, a few seconds of feedback squall, McArdle’s punky yell of “I’m alive” that might make you think you’d got the band sussed, then a quick channel-change to some almost angelic-sounding vocals – sweet, tuneful and harmonious. The same template is found on, well, pretty much everything that follows; second track Jamie (Luvver) following on from the first with such a similarity in tone that you might almost miss the join, and the rest of the album following suit.

Part of the difficulty with this is, simply, that – taken as a body of work (album) rather than a collection of individual tracks – interest can start to wane. This isn’t helped, either, by the chiefly indistinguishable lyrics: that character- and light/shade-drenched vocal might be enormously listenable, but for most of the time we aren’t able to make out what it is articulating. A shame, since McCardle, in interviews, is clearly an expressive, informed and engaged voice in the music industry.

Still, this is a collection of songs with considerable charm. Recalling, in places, the dynamic of a Juliana Hatfield/Evan Dando collaboration brought into the 21st century, the yin/yang of the band’s jangly naivety set against their heavier moments stops either side outweighing or overwhelming the other. So, There Is No Function Stacy coos cutely about “space aliens” at one moment, but is then counterbalanced at the next by the thunderous roar and clatter of the intro to I Don’t Wanna Relax. Crayon has a genuine edge to it, and stands out from the pack with its distinctive rhythm and sense of ire. Jerome (Liar) is an entertaining character study (assassination?) strewn with gems like “You think about size, a lot” and “You talk about Microsoft”.

Closing track Hey! I Wanna Be Yr Best Friend brings one of the albums rather too few changes of pace with its downbeat, atmospheric atmosphere. It’s a curious way to end an album which, otherwise, has seen the band stick rather too closely to its formula, something which, for all that formula’s appeal, ultimately seems rather a shame.