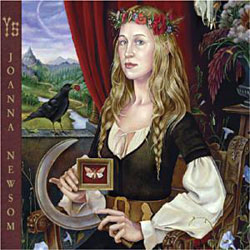 Unique and beautiful music that smashes through established conventions is a rare thing. Joanna Newsom is, therefore, a rare musician. Trained as a classical harpist from a young age, Joanna released her strange yet alluring first album in 2004, and now follows it up with the equally mysterious Ys.

Born in a small town in Nevada, Joanna Newsom began to play the harp when she was 7 years old. She has described herself as always having an affinity with the harp and has considered it her mission to establish that particular instrument as a fully actualised, self contained way of presenting a song. Anyone who has heard her debut album, Milk Eyed Mender, will know what I mean. The coupling of a vocal melody line with her extraordinary harp playing is rather original and disarming. Which leads me on to her singing – incomparable to virtually every other female singer I’ve ever heard, it has a distinct weathered feel to it, juxtaposed with a charming naivety.

Prescribed a place in the ‘Psych Folk’ movement, Joanna herself refuses to acknowledge the label, instead citing her influence as sprouting from an eclectic mixture of Classical, West African, Folk, Appalachian and good, old-fashioned indie music. In truth, she is a rather difficult musician to describe, but this only adds to her appeal and originality. There is nothing else like this out there.

So, onto the new album. The first thing that struck me with this record is how different it is to her previous release. In the Milk Eyed Mender, we are presented with a solo Joanna, either on the harp, harpsichord or piano. The immediate difference on Ys is the inclusion of a full orchestra, arranged and conducted by Van Dyke Parks.

The multitudinous interplay of different instruments is breathtaking, with the employing of a vast selection including a woodwind section, a string section, a banjo, an accordion and a large percussive section, which included a horses skull! Yes, she is a little strange. On paper this sounds somewhat excessive and overshadowing. However, it is arranged so skilfully and mixed so deftly and subtly, that Joanna still remains as the centrepiece, the orchestra merely augmenting and sharpening her sound and intent.

The album represents another departure for Joanna from her previous work in that it is only 5 songs long. However, it still manages to clock in at around 55 minutes. The longest song is New Skin, lasting an impressive 17 minutes. Initially I found this to be rather absurd, and I was more than a little disappointed, being such a huge fan of her first record. But then i swallowed my preconceptions, played the album and, if I didn’t quite get it the first time through, the subsequent times (and there have been many, many subsequent times) have opened my eyes to the extraordinary and melodious qualities present on this record.

The songs on Ys are more like meandering fairy-tales, sung with such eloquence and verve as to negate the need for a more traditional song structure. All are exceptional, but a personal favourite of mine has to be Monkey & Bear. A lilting and rolling narrative about the relationship between a monkey and a bear named Ursula who run away together. Perhaps. To be honest, the story is somewhat unfathomable, but does that matter when we’re being tossed such gem lines as “and the thought troubled the monkey for he was afraid of spelunking down in those caves”? Joanna’s harp acts as ringmaster on this occasion, while the interwoven melody lines take you by the hand and lead you over the hills and far away.

Determined to move forward and never remain old and stagnant, this beautiful album represents Joanna Newsom’s willingness to evolve and grow as a musician and composer. Defiantly flying in the face of the ‘normal’ popular music scene, Joanna is the kind of artist who restores your faith, not just in the business, but in life as well. This is why we listen to music and this is what the best music is all about.