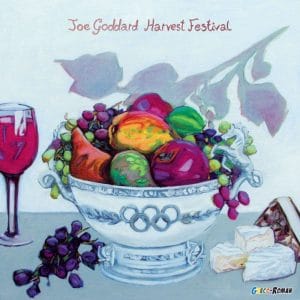 It was always likely to be Joe Goddard who made the first break from Hot Chip to showcase some solo material, his savvy in electronic music evident from the off.

Through interviews and on stage it is clear he has a club music sensibility, professing his love of acid house, dubstep, house and garage. It’s little surprise to report that elements of all are here – nor that they are presented with an assured touch.

He certainly knows how to party. The more hedonistic tracks on Harvest Festival, Strawberry Jam and Go Bananas, are for sweaty, heaving dancefloors. The former has an infectious bounce to his drum track, making the most stubborn of feet move, while the latter’s line of ‘party and bullshit’ stands right alongside classic catchphrases from the era of acid house.

On the flip side, he does a good line in comedown anthems, and none more so than the blissful Lemon & Lime (Home Time), where the party has come to a standstill and the weary feet need a last burst of energy to get themselves home before the full dawn. It’s the track that most resembles Hot Chip on the album.

Other fruit themed tracks on the album showcase an intimate knowledge of his keyboards and sequencers, though all retain the important human touch. Goddard has an unusual and attractive way of skewing his melodic material, too, so that it heads off in unexpected directions even in the context of a short loop. Apple Bobbing and Pear-Shaped are well crafted examples.

It would seem, then, that the cuddly bear of Hot Chip has some unexpectedly sharp claws. He also knows how to make people dance, which might sound obvious, but shouldn’t be taken for granted – it’s a skill that doesn’t come to everyone.

So whereas Hot Chip retain a certain cool to their music, and Goddard ensures their soundscapes are well crafted and relevant, when you get him on his own he’s up for a big night out. Just don’t expect him home til dawn.