Joe Pernice – It Feels So Good When I Stop 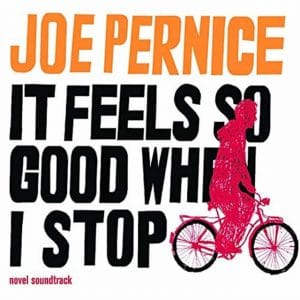 Like so many singer-songwriters, Joe Pernice will feel like a secret best buddy or a complete unknown. There’s no middle ground. But then it suits his persona. He’s the shy guy that some people know intimately, but most don’t know at all. And if the former description feels more appropriate, Pernice’s past work as part of The Scud Mountain Boys, Chappaquiddick Skyline and the Pernice Brothers will, no doubt, be familiar and cherished parts of a considerable Americana collection.

For anyone a little unsure of the vagaries of modern Americana would be best advised to start at the beginning of Pernice’s enjoyable canon of work, which stretches back to the early ’90s. But this album’s collection of covers – meant as a musical accompaniment to Pernice’s debut novel of the same name – is also a pretty good place to start, if in a more general sense. Even though a quick glance through the album’s track titles might not reveal a great deal, Pernice’s selections are well thought-out reminders of how the songwriting craft needn’t venture too far from a slow-to-mid tempo or a subtle lyrical delivery.

Like Pernice’s own work, It Feels So Good When I Stop isn’t hard to befriend. His voice remains inoffensive and likeable. Its worn out, emotionally-bruised timbre dovetails the flawed romanticism and underhanded irony of the majority of the album’s sentiment. And while Pernice might always be shaking off a nice-guys-finish-last epithet, his music never feels defeatist or miserabalist. It is, for all intents and purposes, the unassuming sound of one of life’s eternal underdogs.

The album begins with one of a number of witty excerpts from the novel and sets things up nicely. Its dry and indifferent “if it makes you laugh, great” humour is matched by the album’s unpretentious “if it makes you happy or sad, great” tone. Ostentation is, one imagines, something of anathema for the quiet-mannered Pernice.

As a piece of music, It Feels So Good When I Stop matches the semi-autobiographical nature of the novel. At times, Pernice revisits the jangle-pop of his childhood. Del Shannon‘s I Go To Pieces subtly drifts by, dappled with sunlight and little unnecessary fanfare, while James & Bobby Purify‘s I’m Your Puppet bears the easygoing groove of another musical out-of-timer, Josh Rouse. There’s also evidence of Pernice’s alt-country education. Tom T Hall‘s That’s How I Got Memphis and Sammy John‘s Chevy Van are respectful run-throughs of country standards.

At other times, Pernice’s plugs in the Telecaster and recalls the music of his latter days. Soul And Fire’s lyrics – “As you walk away / think of all the joy we shared / If you decide you need me / I’ll be wondering if I care” – still hit the pit of the stomach as they did when Sebadoh wrote them back in 1993. Plush‘s I Found A Little Baby’s barbershop harmonies lend the track an unexpected eccentricity. But it’s Pernice’s version of The Dream Syndicate‘s Tell Me When It’s Over, which conveniently links the melodic jangle of the ’60s to the iconic lo-fi indie sound of the ’90s, that connects this album’s myriad dots.

All in all, this is an odd, but certainly not unlikeable, package of songs. While it will undoubtedly act as a better accompaniment to the novel than as a standalone, it sheds a little light on the many and varied influences of this Mr Americana.