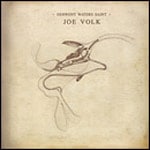 Based in Bristol, Joe Volk has enlisted some help from his neighbours for his debut album in the form of Portishead‘s Adrian Utley. While the Beth Gibbons-fronted outfit defined that whole gloomy trip hop sound with 1994’s Dummy, there is little evidence that Utley has cast any of that magic-depressive (sic) influence over this album. Instead Derwent Waters Saint is a fine collection of stripped-back yet emotionally rich modern folk songs led by Volk’s ever-present acoustic guitar and gently affecting vocals.

You, Running opens the album, a tune with a bassline seemingly based around the old Channel 4 jingle. Such bizarre likenesses are soon forgotten when Volk’s vocals sweetly transport you into similar territory to that which Badly Drawn Boy occupies, albeit minus any of the behatted ones accompanying sonic eccentricities. There are parallels between the two throughout the album but this is to Volk’s credit as he relaxes, touches and moves with his at times uplifting, at times melancholic compositions.

To some, the simple purity of voice and acoustic guitar, with just the lightest sprinklings of piano, harmonica and electric guitar, may form the greatest appeal of his soft folky style. On the other hand it may also prove the greatest bugbear for others as after eleven tracks (twelve if you include the hidden bonus) of unplugged whist, one track may begin to merge into the next. It really depends on whether you believe variety is the spice of life or if you prefer your music to be given to you straight, minus any flab or unnecessary embellishments.

With Jos� Gonzalez doing so well it would seem pared-down acoustic simplicity is very much in favour at present and that can only work in Volk’s favour. Indeed, there are many moments on Derwent Waters Saint, the tempo-shifting soul of Thaumaturgist, the bittersweet Farne or the bewitching melody of This Vehicle Is Moving, that could offer Volk his Gonzalez-style ‘bouncing ball’ moment and jettison him into the mainstream. There is nothing twee or sugary about Volk’s edgy lyrics though, with tales of love gone wrong and the loss of a brother creating a narrative slant best suited perhaps to film soundtracks than corporate advertisements.

The beautiful stillness that runs throughout Derwent Waters Saint is the perfect antidote to our often overly stressful, over-complicated lives: this is not music that will grab you by the jugular, more tenderly caress your cheek with its hand. This set of sweet, heartfelt songs has a gentle air of romance on the surface that befits its Valentine’s Day eve release but has much more lurking beneath that should also ensure a gradual word-of-mouth swell of support, of which Volk’s singing and songwriting talents are richly deserving.