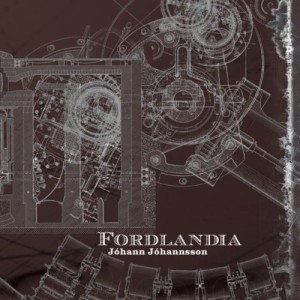 “An American magnate builds a doomed utopia in the depths of the Brazilian rainforest. A Victorian poetess laments the death of Pan. A pagan rocket scientist blows himself up in his Californian garage. A crippled German physicist draws up the equations which can make faster than light travel possible, unseen by the rest of the world.”

The above are all plotlines drawn together by Jóhann Jóhannsson in the making of Fordlândia. The Icelandic composer has already made many friends in response to such storylines, with his ability to take instrumental music to a transcendental state. Few outright demands are made on the listener, other than to unwind, allowing the music to become a luminous sonic background, or to focus on it and appreciate its craftsmanship.

In today’s society the ability to rest the troubled mind must not be undervalued, though there is on closer inspection so much more to admire in Jóhannsson’s method. Fordlândia is conceived on a large scale within classical structures, the tracks effectively sections of a larger work as they interlink themes and textures.

The orchestration is subtle but beautiful. When building layers of strings Jóhannsson is always careful not to overdo the slush, keeping the textures clean yet the music emotive. This means that when a track begins in near-complete silence, such as the very opening, the listener can expect to hear a gradual change of intensity that sweeps all before it over the ensuing seven or eight minutes.

As it happens the title track leads nicely into the first of four sections entitled Melodia, where Jóhannsson exploits a range of colours afforded to him by the clarinets, here with a plangent melody. Elsewhere his use of electronics is incredibly assured, the drum beats more implied than realised, while amplification is given to the piano parts that adds an edge to the timbre without dominating too much.

There are two particular masterstrokes achieved by Jóhannsson in Fordlândia. One is the incorporation of what sounds like a far off Bach Chorale Prelude in Chimaerica; the other an eye-opening arrival of the treble chorus in The Great God Pan Is Dead, a real moment of transparency.

This is the sort of music you might expect to accompany a documentary on the Arctic on the BBC. That’s not to cheapen its value, rather to emphasise just how descriptive and moving it is. And with Jóhannsson’s surety of touch, Fordlândia becomes a wonderfully intense piece of work.