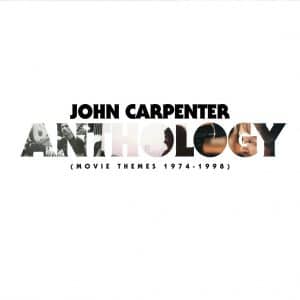 The influence of John Carpenter’s movies is undeniable. Halloween wouldn’t be Halloween without Halloween for example, and the exploits of Michael Myers have influenced slasher movies ever since he first donned that specially adapted William Shatner mask and terrorised pretty much anyone he came into contact with (but particularly, Jamie Lee Curtis). Likewise, it’s pretty much impossible to take a walk on a foggy evening without thinking about being terrorised by pirates. And Jamie Lee Curtis.

Apart from Carpenter’s directorial nous, what makes his movies so effective are his scores. Whilst Carpenter isn’t directing any more (more’s the pity) he is continuing to create music, and his recent works Lost Themes I & II proved that he hasn’t lost his touch whatsoever. Anthology finds Carpenter trawling through his back catalogue and re-recording his classic themes with his son, Cody Carpenter, and godson, Daniel Davies. These might not be the original performances, but the reworking of them has made them a little brighter and most importantly, they’ve lost none of their original power.

When you think of Carpenter’s most effective work, the first thing that springs to mind is simplicity and synths. So the opening gambit of In The Mouth Of Madness will surprise those expecting something a little more subtle. The majority of the score that underpins Sam Neill’s journey into oddness is, in fact, fairly muted, but the theme itself cribs from Metallica considerably. Not the original Thrash Metallica though, but the crossover Black period, and the track’s similarity to Enter Sandman is so strong that a DNA test might well be required. Rock & Roll and the power of the riff has always been something that has informed Carpenter’s compositions and Porkchop Express (From Big Trouble In Little China) is similar in tone to the chugging metal of In The Mouth Of Madness. The guitar tone and simplicity, coupled with the Carpenter’s addition of synths give the track an ’80s cheese that is entirely in keeping with the film’s over the top narrative and tone.

However, it’s the chilled synth simplicity that Carpenter is most well known for. Assault On Precinct 13, his movie about a police station under siege, could have been a bombastic affair, but the sparsity of Carpenter’s approach works wonders. Written over the course of a single day using a bank of synths, there’s a sense of doom that permeates its chilled waves and basic drum patterns. Even here though Carpenter couldn’t keep rock out of his compositions, and Led Zeppelin’s Immigrant Song is a direct influence.

The basic piano melodies of The Fog possess a genuine creepiness which is entirely appropriate for something designed to accompany a ghost story. If the main piano figure seems familiar, then it’s possible you’ve heard it on John Grant’s I Want To Go To Marz where it is repurposed into something far less foreboding. As The Fog continues it introduces a repeated single piano note, a motif that is also utilised in the score of what might just be Carpenter’s finest work, Halloween.

Halloween’s soundtrack and main theme plays a similar trick to that of Jaws. Its utilisation of a bare minimum of notes make it not only instantly recognisable, but it also has the capacity to conjure up a genuine sense of fear within mere seconds. Driven along by a pulse that sounds like a heartbeat in a state of panic, for just a second it sounds almost danceable. And then those dense and foreboding synths come crashing in, shrouding everything in an inescapable cloud of dread. Trent Reznor and Atticus Ross pay it tribute with a remix tied to Anthology’s release.

Another challenger for the title of Carpenter’s finest movie is The Thing. Carpenter didn’t actually write the music for the film: instead, Ennio Morricone did the honours. Still, it gets the recreation treatment here anyway, and if you weren’t in the know about Morricone’s involvement, you’d have thought it was all Carpenter’s work. The signifiers are all there in the shape of fear conjured from a few simplistic synth lines and that familiar heartbeat pulse that seems to be present in his horror work. It’s perhaps a little more abstract and not as hook laden as some of his other themes, but considering the film is set in a frozen, barren landscape, it’s not surprising that there are no real distinguishing features, just an undulating sense of unease.

Prince Of Darkness throws a little choral flavour over pulsing synths and the by now familiar pulse that seems to drive so many of Carpenter’s compositions. The sound of the pulse is as fundamental to Carpenter as the synth sounds he uses. It makes sense, seeing as most of his films are geared towards keeping their viewer on the edge of their seat, always conscious that at any given moment, there’s likely to be something that either causes their heart to stop momentarily or race off like a spooked horse.   That’s not say that he can’t do something more subtle and Santiago (Vampires) is a quite beautiful Western inspired piece that could almost be described as tranquil when separated from the tale of Vampire hunters in the New Mexico desert.

Similarly, They Live is shuffling gumshoe of a tune that wouldn’t be out of place in Twin Peaks. Star Man shifts between beautiful romantic sections and elegant grandeur, and although it was written by Jack Nitzsche, it deserves its place on this collection.   The collection finishes with Christine, the theme from Carpenter’s adaptation of Stephen King’s novel. Those who have seen the movie will most likely think of the song “Bad To The Bone” which features quite heavily, but Carpenter’s score shouldn’t be overlooked. In fact it’s this last track that finds the biting point between his love of a big meaty rock riff and those big synth surges. It might not have the spine tingling effect of Halloween, for example, but as an encapsulation of what John Carpenter does so well, it’s absolutely perfect.