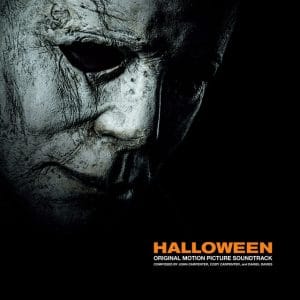 As anyone who knows their horror movies knows, you can’t keep a bad guy down. This Halloween, or more precisely, shortly before Halloween, the apparently superhuman, unkillable, Michael Myers returns to the big screen to once again to scare the living hell out of audiences.  When he first donned his customised William Shatner mask back in 1978 for the original Halloween movie, the film unbelievably didn’t have a soundtrack.

On being told that the movie wasn’t scary by a studio executive, director John Carpenter created a score in a mere three days. That original score has become one of the most influential and recognisable pieces of music in cinematic history. Whether by luck or design, Carpenter’s synths gave the movie a cold, relentless atmosphere that to this day still manage to create a genuine sense of fear in audiences. Part of the genius of that original score is its simplicity and arguably the Halloween theme is perhaps only matched in its economy by those two notes that accompany Bruce The Shark from Jaws.

With the release of a new Halloween movie (the first to involve Carpenter since 1982’s Halloween III) comes a new soundtrack that reimagines some of the original 1978 score, but also provides new music. The Main Theme itself remains relatively sparse, but has been given a new pulse thanks to a thumping bass drum and a few more atmospheric touches thrown into the mix. In this guise, as witnessed at his recent show in London, it has become an almost danceable tune. Whilst it’s unlikely that Michael Myers will be flossing or twerking over his victims in the movie, it’s entirely possible to throw a few shapes to this new version. Even though Main Theme makes a number of appearances in various guises throughout the soundtrack, it never lacks the power to unsettle.

As might be expected, the sound on this new soundtrack is fuller and rounded out more than on the original 1978 score. In part this is thanks to his collaborators Cody Carpenter and Daniel Davies but obviously new technology and additional instrumentation plays a part too. However, the temptation to go overboard has largely been resisted, and the result is a series of tracks that keep things simple whilst maintaining a genuine sense of dread. Michael Kills Again (for example) starts as a whisper only for huge stabbing interjections to enter the fray, just when you least expect it. Which, for a Halloween soundtrack is exactly what is needed.   The main differences between these new versions/interpretations and their original material is primarily down to muscle and bass. Whenever The Shape looms large, a huge bass pulse comes to the fore. Michael it seems has plenty of muscle under that boiler suit, although bizarrely, The Shape Is Monumental is essentially an ambient track.

It’s not all outright stabbing interjections and driving pulses designed to quicken the heart rate, however. Laurie’s Theme, whilst brief, is gentle and contemplative and serves as one of the more tender moments.   Fans of the old soundtrack will find much to love in the new interpretations, and coming from such iconic source material, Carpenter couldn’t really fail. With any luck, the new movie will measure up to the soundtrack and the high expectations that fans of the original movie have for it.