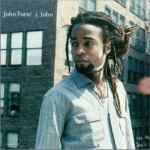 Making a name for himself as a part time member of The Fugees, before becoming an artist in his own right, John Forte is now in the not all too unfamiliar to rap stars situation of releasing a new album whilst incarcerated in prison, currently waiting for his appeal to a 14 year conviction for narcotics offences to be heard, I, John was written and recorded in the time between his arrest and subsequent conviction.

What this meant for John was a reassessment of his life, his material concerns, and the relationships with the people around him, especially those who were less than supportive after his arrest, and his attitude to life in general. What this has also meant is a step away from the hip-hop scene that John came up in. While he still raps, and a large percentage of the tracks on I, John could be classified as hip-hop, there are also rock songs, reggae songs and ballads. And it’s on these tracks that the album is at its most effective.

The Fugees may have sold millions of albums but they were never one of the most innovative rap crews around, and likewise the hip-hop tunes on offer here are not going to cause much of a stir, flat rhymes married to pedestrians beats and hackneyed samples do not equal the most edifying fair, compared to the competition they sound stale and lifeless. Similarly when he tries his hand at a rockier sound the results are equally mixed, sounding like something even Lenny Kravitz would write off as too safe.

Where the album does stand up though is on the most stripped down tracks, when accompanied by just a piano as on All the Pretty People, gentle synthesizer washes on Out of Bed or acoustic guitar on Lady the sense of a young man realizing just what he may have lost and paradoxically rediscovered comes through the strongest. All the “plane rides with fancy females” he sings of in his duet with Carly Simon, Been There Done That, maybe gone, but what remains is stronger, more real, more important.

Defiantly middle of the road, I, John is aimed straight at the millions who bought The Score or any of the various other Fugees solo albums, from those with a passing interest in urban music to your average housewife, I, John is an album that would certainly not trouble most listeners, though those who prefer their music to veer from the polished or the mainstream may find its smooth production and coffee table introspection a tad bland and unappetising.