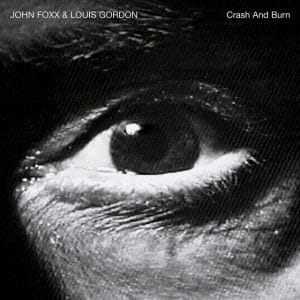 Crash And Burn is the second collaboration between Ultravox lynchpin John Foxx and Louis Gordon, and the staring eye of the cover is something of a guide to what lies ahead.

Foxx and Gordon have cultivated an electro sound with its rootsfirmly in the ’80s synth-pop of Depeche Mode and The Human League, with Foxx’s deadpan delivery often reminiscent of The Sisters Of Mercy‘s Andrew Eldritch – a far more sinister comparison.

The album reminds of forays into ‘dance’ music by people such as Gary Moore and Jeff Beck in its slightly clumsy treatment of rhythm. Foxx fares well though, as his predominant subject matter is technology in the forms of transport, random access memory and infrared, to name a few examples. The stark titles – Crash And Burn, Sex Video, She Robot, Ray 1 / Ray 2 – hint at a darkness that pervades each song. In the David Lynch-esque Cinema this is most effective, a swing beat uneasily cast against Foxx’s edgy “let’s go out tonight” vocal.

Meanwhile Dust And Light is a highly charged electro track with a memorable riff and distinctive vocal colours. Some songs are more obviously updated for the present day, dressed in four to the floor house beats that can be curiously undanceable – an example being the opener Drive, a cousin to the Mode’s Behind The Wheel, or the android tones of Ultraviolet / Infrared, where Foxx’s dark lyrics return to haunt him. Surprisingly things lighten up for the last two numbers, the jaunty Ray 1/ Ray 2 and the softer beats of the epilogue.

With dance music on the back of an ‘Electroclash’ craze thanks to labels such as City Rockers and acts such as Fischerspooner, Crash And Burn could well find a place in this section of a record collection.

As a picture of early 21st century life it is openly realistic, hinting at a progression to a Blade Runner society of replicants. This may put off those of you who subscribe to a brighter outlook, but if you like a bit of darkness and know a thing or two about Ultravox, go and satisfy your curiosity.