John Foxx And The Maths – Howl 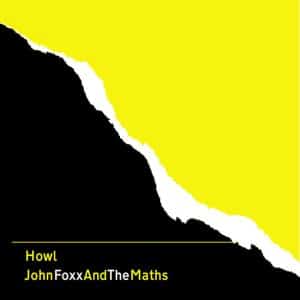 John Foxx has something to get off his chest. On his first album for three years, the one-time Ultravox front man is back with The Maths, and his music is as powerfully defined as ever.

Foxx has been enjoying a rich run of creativity ever since he teamed up with synth wizard Benge in 2010. In the decade since their first Roundhouse show the pair have made six studio albums together, creatively spurred on by like-minded musicians including Hannah Peel, and now most recently Foxx’s one-time Ultravox band mate Robin Simon.

His is the instrument we hear first on the album, a distorted guitar punching out the first of several effective riffs on My Ghost. It serves notice from the off that Foxx and co. mean business, and this statement of intent is only heightened by the title track, with Simon’s twisted melodic lines squealing over an irresistible groove that harks back to the David Bowie of Fashion. The deeper contours of this work are uncomfortable but also cathartic, Foxx imploring us to “howl and let the beast out” while simultaneously recoiling in horror at the climate in which he finds himself.

These tracks are as uncompromising as anything Foxx has written, the vocals hurled out as though in upper case. They are intensely concentrated but sound brilliant in tandem with Benge’s production, which again uses the best of 1980s analogue to complement some liquid grooves. The best of these club-based settings is Tarzan and Jane Regained, where a slinky drum track and echo effects are laid around Foxx’s haunting vocal. They close in on the listener along with Edwards’ searing guitar track, compromising the urge to dance.

Indelible references to our current predicament are made throughout the album, with New York Times and The Dance scratching their collective heads at the world today. Everything Is Happening At The Same Time talks directly of the scenes on the news – “Things I can hardly believe, things I wish I’d never seen”, says Foxx. “Why do we have to choose between the clowns and the fools?” he asks, to the tense but elegant backdrop of synthesized strings.

The best is saved for last in the form of Strange Beauty, a mysterious and achingly beautiful song that contains some of the most openly emotional songwriting Foxx has yet delivered. “Love is the strangest thing I’ve ever known,” he sings, “when it fades away, leaving me with just a taste of strange beauty.” It is a profound way in which to close the album, a beautiful epilogue in response to the departure of someone dear.

Howl is right up there with one of John Foxx’s finest musical achievements, which is saying something given his form with The Maths in the last decade. It is a storming electropop record taking account of the times in which we live but fighting them with positive energy. His music is as strikingly relevant now as it was in the late 1970s, the creative fires burning brightly in the relative darkness.