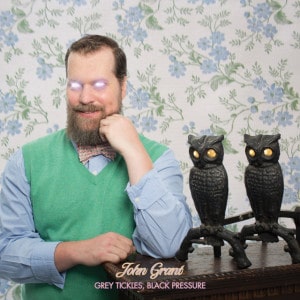 ‘Tis the season for the rock star autobiography, it would appear – it comes around so quickly, doesn’t it? – and bookshop shelves will soon be bowing with Elvis Costello, Chrissie Hynde and Tom Jones’ tomes, with others surely en route before this most wonderful time of the pop publishing year is over. (Of course Grace Jones, as ever, got in there first.)

John Grant certainly hasn’t avoided the autobiographical so far, and Grey Tickles, Black Pressure is no exception. If his adopted home of Reykjavik seemed to inform the icy electronics of the brooding Pale Green Ghosts, then the news that Grant travelled to Dallas for the recording – where Queen Of Denmark was made with sometime FM rock revivalists Midlake – might suggest a return to the barbed tenderness of his solo début, to the self behind the touching TC & Honeybear and the desperate Where Dreams Go To Die.

But the Grant of 2015 has grown, and found happiness in love. Love, says Grant, is the central theme of the 12 songs here, which are bookended by the same biblical quote, from First Corinthians – “Love is patient, love is kind…”. This version is older, happier maybe – while still possessing the same mordant wit, rich baritone and disarming, even angry honesty – and ready to face the hidden surprises of middle age: “I did not think I was the one being addressed, in haemorrhoid commercials on the TV set,” he sings over the sweeping title track’s descending chords; “I often stand and stare at nothing in the grocery store, because I do not know what to buy to eat anymore”. The titular Grey Tickles are a literal translation of the Icelandic for midlife crisis, Black Pressure of the Turkish word for nightmare, and Grant takes them both on, reflecting not just on his advancing years but his diagnosis with HIV, while accepting that his problems “cannot compete with … children who have cancer”.

Musically, Grant sounds like he’s having fun over the first few tracks here, and the grandiose arrangement of the opener gives way to Snug Slacks’ sniggeringly libidinous, slimy funk and Guess How I Know’s rage at a zombified former paramour, with prowling bass and distorted vocals that could have crawled out of Nine Inch Nails’ The Downward Spiral. You & Him follows, another put-down, and while the pulsing electronics are of a piece with the preceding tracks, the chorus (“You and Hitler oughta get together, you oughta learn to knit and wear matching sweaters”) is petty where Grant has previously been lacerating, resulting in one of the album’s few missteps, along with the politely meandering Down Here. The pins are put away for the bright, playful Voodoo Doll, though, made to represent a depressed friend and comforted with chicken soup and hot chocolate.

The more down-tempo, stately second side opens with Global Warming’s ’70s homage, a riposte to “slack-jawed” climate change deniers. Magma Arrives is a grand, choral recognition of Grant’s – for now – dormant capacity for great bitterness and anger, but the epic Black Blizzard’s slo-mo synth-pop, replete with some delightful analogue noises, feeds on into the towering Tracey Thorn collaboration Disappointing. Julie Andrews by way of Daft Punk, it’s a discofied run-down of Favourite Things (“Ocelot babies…bass clarinets…owls…the genitive case in German”) that cannot compare to the majesty of a lover; one of Grant’s best moments to date, it’s certainly one of the funkiest songs to mention Dostoevsky and Bulgakov you’ll hear.

A little uneven overall, the album ends well, with two of its better ballads: No More Tangles (“…no more tears”) turns a shampoo slogan into an ode to his escape from damaging former relationships, while Geraldine’s swooning strings complete a trilogy (with Sigourney Weaver and Ernest Borgnine) of songs for screen stars, Grant hoping Page “didn’t have to put up with this shit,” and “didn’t have to do it like the others,” because “we’re not like them, we’re not that strong”.

If John Grant never feels the need to write his memoirs, it’ll be because they’ve been played out for us over the course of these three brutally frank, flawed but ultimately human albums. Never less than enjoyable, the next chapter is bound to be worth the wait.