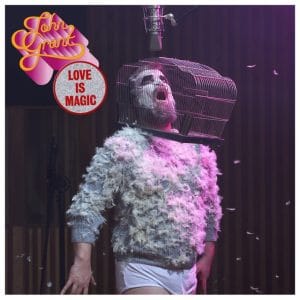 Listening to John Grant’s fourth solo album, it’s difficult to believe that he turned 50 this year: like all of his work it’s cut through with melancholy and darkness in places, but Love Is Magic is nonetheless the liveliest and most playful record he’s released. This is in part because of the way it sounds.

Grant’s previous albums have managed to successfully pair piano-led ballads with big beats and analogue synths, but the more acoustic material is all but banished here – it’s his most electronic album to date. He sounds as though he’s having fun, but he’s also rightly concerned by the state of the world and those in power: there are a couple of digs at Donald Trump, and closing track Touch And Go is tribute to Chelsea Manning.

Grant worked with Ben Edwards, otherwise known as Benge, on the album, and in him he seems to have found a collaborator who can turn his musical visions into solid and coherent structures: the engineer to Grant’s architect, if you will. Benge is part of the group Wrangler, who Grant recently collaborated with under the name Creep Show; he’s a noted synth wizard and obsessive who clearly helped to ensure that the record rarely stands still, and his synths create sombre and hedonistic moods in turn.

Grant’s lyrics have always been striking, often highly emotive and confessional, but also frequently designed to raise more than a few eyebrows. Here, there are moments where he is more cutting, and more sleazy than ever. Just look at a few of the song titles: Smug Cunt, He’s Got His Mother’s Hips, Preppy Boy. In the latter Grant sings, “Come on now preppy boy, if you’ve got an opening then I am unemployed.” His delivery is on top form too: opening track Metamorphosis is a free-wheeling stream of consciousness – almost like a contemporary, electronic version of Bob Dylan’s Subterranean Homesick Blues – in which he veers from rape to yoghurt to Isis to Marvin Gaye, and his voice sounds like comic villains, Freddie Mercury and everything in between.

Diet Gum is the most marmite track here and takes a few listens to really make its point. Delivered in casual, spoken word style, it is on one level the coked-up rantings of a narrator who’s just run into an ex and is trying to hardest to humiliate them – but it’s less of an uncomfortable listen than that might make it sound. It’s also very silly at times, particularly in the insults Grant throws out: ‘Dr Turdface’; ‘Stupidzilla’; ‘Your royal doofusness’. The twist is that halfway through the song the narrator stumbles in his tirade and is seduced by his interlocutor. The refrain – “I manipulate, that’s just what I do” – takes on a more layered meaning. This isn’t just someone who manipulates other people, it’s someone who manipulates his presentation of himself – as most of us do – but who fails to keep up the act at times.

The Common Snipe is among the album’s more pensive and stately songs, in which Grant discusses the mating rituals of various bird species, including the extraordinary habits of bowerbirds, hummingbirds and spoonbills. “But it was the cry of the common snipe, which kept me up in my bed at night,” runs the soaring chorus. Grant must be aware that the mating call of this otherwise ordinary little bird, which is in fact the sound of air passing through its tail feathers, sounds quite a lot like it could have been made by an analogue synth. Metaphor, nature facts, and hidden reference to the music itself: this could only be John Grant.