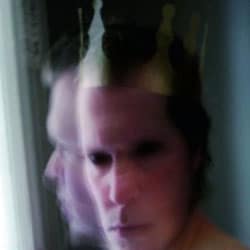 Towards the climax of Queen Of Denmark’s impossibly poignant opening track TC And Honeybear, John Grant‘s distinctive baritone swells like the heart of a teenager, caught by the heavy tide of young love. Grant sounds just like Barry Manilow. The same hint of vibrato. The same vocal that has been ever so slightly perfected and double-tracked in the studio.

But for all of Manilow’s sweet, cherubic charm and an entire canon of work clothed in soft focus, Grant deals only in paper-thin lyrical fantasies and tantalising glimpses of happiness. Grant’s music – as part of his former band, The Czars, and now his solo work – is often sepia-toned, emotionally worn and frayed at the edges. Emotions are never expressed flagrantly. Grant largely underplays it, letting his vocal tone and painfully lovelorn lyrics hit home like repeated blows to the stomach followed by apologetic kisses to the forehead. It’s a pain as knowingly self-inflicted as it is inflicted by others, and it leaves its mark.

With age, and perhaps the freedom of not having to consult band members anymore, Grant is more confessional here, and seemingly more comfortable with it. Heartache and inadequacy were always implied on past Czars albums, but Queen Of Denmark sees Grant largely bypass self-pity and head for either tender romance and reflection or acid-tongued accusations and blame. Ex-boyfriends are subject to distinctly non-sexual lashings on more than one occasion. It’s a wry charm that keeps Grant’s confessions digestible. Musically, Grant has also been freed up.

Thanks to Midlake‘s obvious influence – Grant’s labelmates act as his backing band on this recording – ’70s soft-rock largely inspires Queen Of Denmark’s sonic framework. With deft string arrangements, Grant’s grasp of pathos is more like tragedy held in fragile hands than the over-egged sentimentality of bands from that particular era. Ironically, the first few piano chords and softly-sung verses of Where Dreams Go To Die do sound like the opening bars of Mandy.

But Grant’s melancholy is his own. His voice creeps into the song like a shy kid on the first day of school that would rather not introduce himself to class. It’s a unique voice, tainted, nearly crippled by sadness, but a sadness reined in slightly by its warbling, robotic tenor. Like Mandy, Grant goes for the big finish, but it’s the kind of well-tempered string-laden finale that Clifford T Ward or Tindersticks would be proud to call their own. The same can be said for standouts, I Wanna Go To Marz and It’s Easier. In the place of extravagance, Grant and Midlake muster elegance.

Happily, Queen Of Denmark isn’t an album wholly focused on mirror-gazing and the reconciliation of loss. A regular injection of caustic wit and childlike playfulness make this an album of almost diametrically-opposed moods. Quite possibly a reflection of Grant’s life, the album’s humour and wit is pain and suffering’s antidote. During the dreamy, Pink Floyd-esqe Outer Space, Grant wistfully sings: “You can open up the heavens for me with just one smile.” This is followed by the synth-funk of Jesus Hates Faggots and memorable slurs (possibly directed at his religious upbringing) such as: “The arrogance it takes to walk around the world the way you do / it turns my brain to jelly every time.” Occasionally, Grant’s sardonic lyrics and even the comic tracks themselves can feel a little awkward, but he is such a likeable underdog that it’s easily forgiven.

It is, admittedly, the ballads that catapult this album and permit it a place among the great pantheon of memorable break-up albums. It does everything a break-up record should do. It consoles, it recollects, it weeps, it wonders; it’s a riposte to all the selfish, heartless bastards out there and it’s a reminder that loss can be countered by things other than pity. Like other masters of this sad art – Eels, Mercury Rev, The Flaming Lips – Grant is one of music’s unfortunate poets, an outsider with the power to live out his fantasies by way of another far more fantastical life and the gift that he has been given.