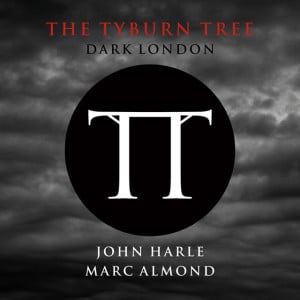 The success of some records depends on the level of audience participation they receive. If a record has a pervading theme, concept or narrative arc, the listener is required to immerse themselves in the story and judge the experience when they come out the other side.

Rhetorical questions abound after hearing a record like The Tyburn Tree, part of an ongoing collaboration between Marc Almond and John Harle designed to tell the story of the darker side of Her Majesty’s City of Residence, London. It’s the London of Jack the Ripper, corpses and vampires – high-goth decadence in musical form.

Almond, thanks to the diversity of material and changeable tone of the concept, is allowed to fully stretch and explore his vocal ability. Some of the moments he provides on this record are extraordinary, for different reasons. John Harle’s contribution cannot be understated also – he composed the majority of the piece and it’s testament to his ability that there is such a platform for the other musicians taking part to really shine.

However, a risk that all musicians take when they set out to compose a concept album (or especially the dreaded ‘M’ word – musical) is that the entire project will come off looking and sounding like a farce. Listeners can rest assured that although The Tyburn Tree has its hairy moments of high-camp melodrama and overly theatrical elements, it never slips into the ridiculous.

The music itself is a treat for the ears: splendidly produced, clear and geared towards Almond’s voice, the music holds an epic, sweeping, grand quality that befits a project like this. By releasing it on his own label, Sospiro Noir, Harle retains an element of control over the entire project, which would lead the listener to believe that this project comes fully formed.

Opener The Tyburn Tree begins with an electronic buzz and Almond’s soaring voice, falling somewhere musically between a Phantom solo number and the more desolate music of ’80s horror cinema. Which is no bad thing. Stuttering wind instruments add to the sense of impending gloom, a solo guitar augmenting the sound before Almond beseeches the listener to “take a ride to Tyburn and dance the last jig”.

Fortress starts immediately as the opener ends, this time building from a galloping rhythm up. It fuses Latin and Eastern moods into its lyrical musings on London. Almond’s enunciation and signature vocal timbre is the highlight here, sandwiched as it is between a wall of grooving, undulating sound and operatic backing vocals. Vaguely reminiscent of the Araboiserie of Joseph’s Technicolour Dreamcoat, it stands out amongst the other tracks as a potential highlight.

Spring Heeled Jack is a tale about theYe Olde English legend of the same name. It features bizarre rapped poetry by Almond, an unhinged King Crimson-esque mathy guitar and Sympathy For The Devil conga/bongo thrums (the piano from 1:20 is also very similar to that used on the Rambo films when he faces certain danger). My Fair Lady is a fairly workmanlike, barely embellished cover of the original folk song, and Ratcliffe Highway, which follows, dips back into the horror-cinema pool of ideas.

The Labyrinth Of Limehouse fast becomes squalling prog-rock and ends with ominous sounding digital mood-making background noise. A highlight is undoubtedly The Vampire Of Highgate, its space-age synths and tightly wound rhythm become a showcase for Almond’s David Bowie-esque emphatic vocal line. The synths sound rudimentary but are completely effective, with sound effects borrowed directly from early sci-fi cinema. The closer, Jerusalem, is another track worth highlighting. It opens with courtly brass, before a tribal, careering rhythm that winds and wheels while Almond pontificates. It’s got a sometime glam stomp, sometime theatrical monologue feel that drives it towards the triumphant finale.

It’s a well-thought out, well-played and well-executed record by musicians that have enjoyed the luxury of complete artistic control here. But it can’t be recommended to people that aren’t fans of either of the names on the marquee. It can’t even be recommended to fans of Almond’s synthpop adventures. However, when given chance, it can entertain and bewilder the listener, which is the entire intention of the project.