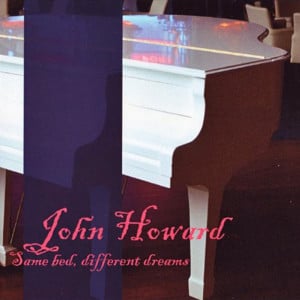 John Howard is on a roll. The hiatus of 30 years between his debut (and rapid disappearance – wrong time, wrong place) and his re-emergence as a musical force has meant that this natural singer-songwriter has a huge backlog of ideas, tunes and lyrics fighting to be heard. Same Bed, Different Dreams demonstrates that there were gems waiting in the queue.

Punchin’ Judy is an unforgettable song that makes an immediate impact. Gritty and unflinching, it deals with a difficult subject in an extraordinarily moving way, the story narrated first-person by the victim of abuse. I heard this for the first time live and marked it as special: it’s lost none of its power in the recording.

At the other end of the spectrum is The Builder From Heaven – “a hero in jeans and white t shirt and van… but where is he now?” It’s as camp as Julian & Sandy but it’s also a musical delight, and reveals – among the much more serious tracks – the warmth and sense of fun that’s so much a part of John Howard’s personality.

There are a generous 16 tracks on the album and there isn’t a duff one among them. There’s down to earth, hard edged story telling in Gutter Bitch (before and after) and They. There’s drama and breathtaking melodic beauty in ‘Til Then. There’s playfulness and sharp observation in My Girl By the Temptations. And there are a whole host of other songs that just sound… right.

Success kicks off with lush solo piano and turns into a tender song of love recalled. But reality is never far away – is this another glimpse of the tragic heroine of Goodbye, Suzie in They? If so she’s just one of a cast of characters living on the seamier side of life.

The piano intro is back for Oh Midnight, this time reminiscent of early Divine Comedy – the Liberation era – and the song develops beautifully into one of the most satisfying on the album. The title track is another little beauty, this time with more of a matin�e feel. But they’re all good…

This is John Howard’s best work to date. Not only is the material great, I love the sound on this album. Nothing fancy, but a warm balance of piano and voice, with the unobtrusive addition of other instruments only when they will add something to that balance. He has a terrific, rich voice but in previous recordings it has sometimes sounded strained. Here it comes through with the warmth that reflects the man.