John Maus – We Must Become the Pitiless Censors of Ourselves 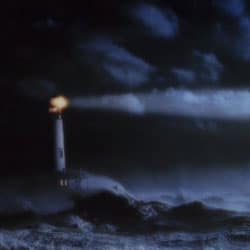 John Maus has a surprisingly large pedigree. The Minnesotan composer has kicked around tapes since the early ’90s, ascending alongside the collaborative likes of Panda Bear and Ariel Pink before embarking on a solo career in the midst of the last decade. He may look like a fresh face in the grand scheme of things, but he projects an old soul – his husked voice barreling through synths in a gothic throb and his live show adored for its visceral intensity.

He’s the kind of guy who wishes he was born in another era, when primal synthwave didn’t sound chintzy or devolved, but eerily futuristic. As time machines remain nonexistent, Maus does the next best thing; every aesthetic of his third record We Must Become The Pitiless Censors Of Ourselves sounds completely locked in an epoch – from the retro synthesizers to his darkened libretto.

Mining the traditions of crossover electronic music from the late ’70s and early ’80s isn’t necessarily a novel prospect; plenty of other bands and artists have done the same in recent years. But few approach their songs with the level of pure reverence that Maus does. The sounds in his repertoire are pitch-perfect; enlisting a number of analogue bleeps, brittle drums, and clouded lyrics referencing a vampiric, nocturnal obsession. It’s especially evident on moments like the opener Streetlights and the closer Believer; washed in caramelized synth, they hit their time-worn target with such refined elegance; they honestly feel at home next to the era’s original tapes. For the most part John Maus doesn’t forget that songwriting steeped in a style is much more effective than a style steeped in songwriting, as his best moments make him sound like a forgotten icon.

Yet he can get a little more modern in his moodiness. A song like Keep Pushing On keeps the nostalgic instrumentation, but adopts a crystal-strewn indie-pop hook, relating the beatific Postal Service or one of Zach Condon’s electronic Beirut moments. It’s anachronistically uncanny, a statement to Maus’ keen ability – and probably the best and most logical update you’ll ever hear of primitive synthwave. If you care at all about obscure genre references.

Unfortunately We Must Become The Pitiless Censors Of Ourselves isn’t entirely made up of his best moments; occasionally his tracks appear smudgy, half-formed, lacking the muscle that makes him great. The hollow stains of …And The Rain, Cop Killer and Head For The Country lack the pristine organization of his better tunes, and sound like a jumble of ideas unloaded into a song. It makes sense that the conceptual gravitas behind an album like this wouldn’t have enough fuel for 11 songs (the originals of this scene weren’t necessarily known for their full-lengths) but it certainly would’ve been amazing to see him pull it off. Specific, loving, authentic, but limiting, it may leave us wanting more – but there’s no doubt that John Maus made the album he wanted to make.