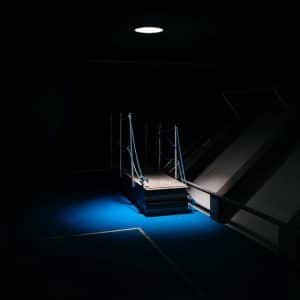 Prepare yourselves accordingly because JOHN’s third album Nocturnal Manoeuvres is upon us and it’s a blistering ear-burst of a noisefest. The title itself is mockingly inappropriate; if you were to stick this on at night you’d have irate neighbours kicking down your door within minutes. It won’t come as a surprise to fans, but they seem to be getting bigger, noisier and more menacing as time goes by. Considering they’re a mere duo, that’s an achievement to leave Royal Blood sounding like Clannad in comparison.

Once again turning to Wayne Adams on production – he’s been there for the whole studio album ride – they return with a more focused directive, the bond the pairing of John Newton (drums/vocals) and Johnny Healey (guitar/backing vocals) have made with Adams undoubtedly helping to hone skills on both sides of the glass window. 2019’s Out Here On The Fringes threatened apocalypse but it’s fair to say Nocturnal Manoeuvres delivers it.

JOHN are a marmite band – you will either love ‘em or hate ‘em, there is little middle ground, and that is due to Newton’s vocal style more than anything else. If you’re a newcomer to the duo, imagine the most horrifying horror movie villain where their deep demonic vocal tones give you the jitters with ease; take that voice and then stick it through a cement mixer via a Dalek vocoder and you’re not far off. As a result, lyrics are generally difficult to pick out.

After the modestly refrained instrumental intro Return To Capital, the bludgeoning of the senses begin as Šibensko Powerhouse, a track featuring Idles’ Adam Devonshire, lives up to its name: chainsaw guitars marry with pummelling drums for a cacophonous roar, briefly interrupted so you can spot some of those hard to decipher lyrics, “I remember those half-built dreams,” we hear. Nicely titled single A Song For Those Who Speed In Built-Up Areas is slower, but the sledgehammer is still lurking and the excellent drumming is addictive listening alongside scrawling guitars.

Referencing an Austrian film director, two-minute blast Haneke’d refuses to let up on the vigorous attack on the senses, sounding a little like The Prodigy’s Firestarter during its early vocal delivery. The vocals do at this point become one-dimensional, so even if they’re not your thing you may be asking for a little variety by now; the relentless onslaught is hard to escape. But instrumentally it’s utterly compelling, and throughout the record you’re taking a thrilling ride with little let up.

Perhaps the most commercially appealing or radio-friendly – for want of a better term – track is Austere Isle, where guitars hold themselves in check a little more to conjure a magnificent soundscape featuring less heavy thrash. Closer Nonessential Hymn is another that delivers instrumental brilliance: at over six minutes, it’s the longest track on the album and only one of two that gets past the three minute 15 seconds mark. But the entirely instrumental second half is a huge highlight with its racing guitars and battering drums, creating enough energy to power a fuel-starved nation.

Whilst the progress JOHN have made is impressive, the vocals will divide listeners. However, even if they’re not your thing, the brilliance of the music and the emotional weight it carries is enough to leave you bouncing off the ceiling. And after all, isn’t that the reaction we all need from music at some point? It’s all about moods, of course, but if you need some blood-pumping power during one of those moods then Nocturnal Manoeuvres is for you.