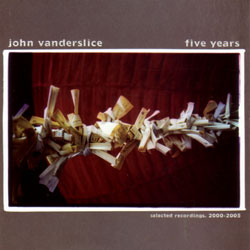 This might come as a shock to the system, but the music business is often more business than music. Yup, as was one hard-bitten old Scouser once expressed it, ‘you’re nobody in this town, til’ everybody in this town, thinks you’re a bastard’. And it was while listening to the John Vanderslice Euro-only primer Five Years, that this bleak old line came to me in a rueful flash of significance.

The prolific Vanderslice (as he will doubtless be known) has knocked together five albums in (you guessed it) five years, including Pixel Revolt in the now dear-departed indian summer of ’05. And with only limited UK distribution given to that quintet, this selection box gives gives the four-syllabled one a chance to air his wares in an easily-scanned format.

Though a songwriter given to self-conscious imagery, and a muso-kit bore of Lou Reed dimensions, it should be added that Vanderslice is a thoroughly good egg. A passionate advocate of hip-hop in all its variants, an avowed opposer of the unholy trinity of Bush / Cheney / Wolfowitz, and ever eager to give heartfelt props to fellow travellers like The Mountain Goats‘ John Darnielle and avant-jazzbo cellist Erik Friedlander.

However, it is my solemn duty as a reviewer to inform you, the surfing public, that these Five Years actually loiter with a ponderance more akin to five centuries. And these are no sexy Greco-Roman or post-Copernicus aeons mind. No, these particular epochs belong purely to the Dark Ages.

Full of good intentions and sprightly ideas, it’s the oft-trad execution that lets Vanderslice down. Though an appropriator of exotic instrumentation, and fond of ‘treating’ instruments in Eno-ey fashion, the old adage of it ain’t what you do, it’s the way that you do it, bites hard.

My Old Flame and Pale Horse list lyric credits to Percy Bysshe Shelley, but annunciated in Vanderslice’s unyieldingly flat intonation they might as well be the collected scribblings of the Cheeky Girls. Elusive is the skillful phrasing typical of otherwise harmonically-challenged singers like Will Oldham or Bill Callahan. Instead we are treating to a sub-Vedder grinding tone that still appears to pass as earnest, authentic expression in alt-rock territories of the USA.

There are odd respites. The gracefully sustained parade of Trance Manual, a delicate account of a rendezvous between an Iraqi prostitute and an American journalist where the “cowboy bars / and dance clubs / don’t exist”, is so exquisitely arranged and delivered that its hard to believe its from the same set. Vanderslice’s empathetic depiction, framed by Friedlander’s respectful cello and the inspirational addition of Scott Solter’s (of Spoon fame) church bells, never overreaches, never demands more out of his lungs than they’re capable of giving.

There are little more than flashes elsewhere. The David Lynch-inspired Promising Actress twinkles with promise, while brassy mariachi touches almost rescue Pale Horse and Keep The Dream Alive from Vanderslice’s unleavened voice. Scratch under the surface, and the ‘stridently analogue’ Vanderslice has a subtle, skilful way with a few old dusty hammonds and antique mellotrons. But as all the tracks are pressed into the punishing service of getting the ‘songs’ over, there’s limited space for their warm dazzle to be fully expressed.

Its easy to like Vanderslice, but its much harder to like his music. When faced with the dread art/commerce interface that has seen so many good people fall by the wayside, you find the devil often has the best tunes after all.